30 years after the fall of USSR, Russian-speaking Jews go global 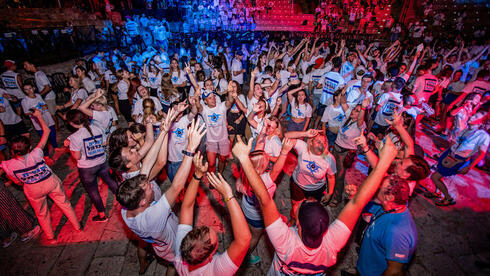 Russian-speaking Jews are an important and fascinating part of the history and future of the Jewish people across the world...

and Genesis Philanthropy Group aims to advance Jewish engagement into the 21st century.

Several years after the fall of the Iron Curtain, when David Rozenson first returned to his hometown of Leningrad, (which he left for the United States as a child), to train teachers for Judaism programs, he was astonished by the passion of his students for everything Jewish, after the Soviet regime sought for decades to erase every trace of Jewish education. "I will never forget the notebooks they filled out in handwriting, their passion for learning Hebrew, for reading poetry.

It was not just a flame, it was a roaring fire," he remembers.Rozenson, now the executive director of Beit Avi Chai, a Jewish cultural center in Jerusalem, has lived in several Russian-speaking Jewish communities - from his childhood and adolescence in the United States, through studies in Israel to living for more than a decade in Moscow, where he was active in formulating and implementing Jewish curricula and community events. His journey, like a drop of water, reflects the contemporary reality of millions of Jews, who were liberated 30 years ago from the yoke of Soviet rule and today constitute a fascinating global community, of which one million Russian-speaking Israeli citizens are an important part.

Russian-speaking Jews in the United States: A variety of currents, assimilation, and Israel

Besides Israel, the other main location of Russian-speaking Jews today is the United States, where between 400,000 and 600,000 Jews and their families arrived. "Of these, over 100,000 arrived in the 1970s and 1980s, but most of them emigrated after the dissolution of the Soviet Union," notes Dr. Nati Kantorovich, head of information and research at “Nativ” in the Prime Minister's Office.

Among Russian-speaking Jews in the United States, the older “Soviet” generation, who carried the heavy task of immigration and building a new life, shows a greater closeness to Judaism, as part of the identity with which they came to their new land. "The older generation worked to establish community organizations, and Russian-speaking Jews are known as the most pro-Israel Jewish community in the United States," says Dr. Kantorovich.

The younger generations, on the other hand, are much more involved in American society. As in many immigrant communities, some young people try to get away from their roots, "and some absorb local perceptions about diverse issues, including Israel," says Dr. Kantorovich. This means both adopting critical anti-Israeli perceptions that exist to one degree or another in U.S. universities and, on the other hand, being very active and vocal in support of Israel – for example, SSI (Students Supporting Israel) was founded by Jews from the former Soviet Union.

This deeper integration of the younger Russian-speakers in America brings with it worries of assimilation, which is a common problem of the general Jewish community in U.S., but also new opportunities for wider contribution to American Jewish life. "Many second-and third-generation immigrants are in leadership positions in Jewish communities, on campuses, in Jewish organizations," Rozenson says. "You can also see a growing number of intellectuals and entrepreneurs, many of whom came as children from Russia, who are becoming very important in literature, culture, society and business in the Jewish community and in American society as a whole."

One of these young Russian-speaking American Jewish leaders is Marina Yudborovsky, CEO of Genesis Philanthropy Group (GPG), who came to U.S. when she was nine years old. Founded by Russian-speaking Jews themselves, GPG, as Yudborovsky puts it, “works everywhere RSJ are and then some”, helping to develop and strengthen the Jewish identity of Jews from the former Soviet Union and their children. Thirteen years of experience give GPG a unique perspective and knowledge, and today it partners with leading Jewish organizations, such as JFNA in America, for even deeper integration of “Russian” Jews in American Jewish life. “New generation of Russian-speaking Jews in the U.S. – just like everywhere else on the globe – has both an enormous potential to reinvigorate the existing communities and the appetite for Jewish knowledge," she observes. “Jewish future depends in large part on being able to harness this potential."

Germany: Dealing with the memory of the Holocaust

Another focus is Germany, where the vast majority of the current Jewish community is made up of Jews from the former Soviet Union. "There are about 220,000 Jews and their families living in Germany, most of whom came after the dissolution of the Soviet Union, half of them Jews according to Jewish law," says Dr. Kantorovich.

"The very fact that Jews immigrated to Germany presents them with a significant issue that Jews who came to Israel or the United States did not have to deal with - the memory of the Holocaust at the place where it originated," says Dr. Kantorovich. "In studies conducted in recent decades and also in dialogue with Jews on the ground, one can see the discussion and concerns surrounding such a sensitive issue."

Similar to the community in the United States, the younger generation has more complex Jewish perceptions. The younger generation of Russian-speaking Jews in Germany sees themselves more as European citizens. "They come to the big cities, use the European passport to travel and live around the world," says Dr. Kantorovich. Nevertheless, the resurgent threat of antisemitism has mobilized the young generation of former Soviet Jews in Germany.

“This is a community that is very combative when it comes to defending its identity," notices Marina Yudborovsky. “Whenever they are, Russian-speaking Jews went there to be free and to live their Jewish life as they see fit, and if they have to defend this privilege, they will. We see very spirited movement in Germany as these Jews step up to combat antisemitism and support Israel”.

The post-Soviet space: Building diverse communities and accepting Jews in the public and political space

Simultaneously with the waves of immigration of Jews to various countries around the world over the past decades, many Jews remained in the post-Soviet space – Dr. Kantorovich estimates the number between 900,000 and one million. And what do the Jews do? Build communities, plural, each to his own liking. Dr. Kantorovich notices that "there are Israeli, Western, religious and secular elements that work extensively to establish and develop communities, and you can even observe the familiar division between the movements Judaism in the post-Soviet space - Reform, Conservative, Chabad, Lithuanian. There is a variety of possibilities, so that every Jew can connect to the community that suits them best."

It must be said, that, regardless of the complicated politics of the region, the official attitude towards Jews in almost every post-Soviet country underwent nothing short of a climate change – the glaciers of state-sponsored antisemitism are gone, hopefully for good. Jewish life has become public, and the needs of the communities are recognized and taken into account by the local leadership.

Another proof of change is the presence of Jews in key public positions. "In Ukraine, a Jew is elected president, in Latvia the president is Jewish on his father's side," says Dr. Kantorovich. "In Russia, government officials with Jewish roots serve. Today the Jews are part of the political, business and cultural life, without hiding their Judaism." This means also connecting openly and passionately with Israel. “Nativ”, which was established by Ben-Gurion and for many years worked in secrecy to connect with the Jews behind Iron Curtain, today works openly, bringing Israel to local Jews. "Today no one peeks behind their backs anymore to see if anyone is following him and lurking for him. It shows a lot about the current atmosphere," says Dr. Kantorovich.

The connection to Israel is strong and maintained by many and varied bodies - official Israeli institutions such as the Ministry of Foreign Affairs and Nativ as well as the Jewish Agency, work freely for cultural and social rapprochement. "Jewish organizations celebrate Israeli holidays and memorial days, organize public demonstrations of support for Israel, the study of the Hebrew language has become visible and quite a few master it at various levels. When there is a dialogue about Israel in the media, representatives of Jewish organizations are invited to be interviewed and speak for Israel.”

Taking Russia as an example, Rozenson believes that "there is no doubt that the State of Israel serves as a critical connection point for many Jews in Russia today. The number of Jews who immigrated to Israel, who have relatives in Russia, produces a critical connection for the development of Russian Jews. It is critical in expanding the current initiatives and creating new and meaningful ways for Russian Jews to learn, to participate in Jewish life.” The same is true for the other post-Soviet countries as well.

One of the main concerns of Jewish communities in the area is aging. "The median age of Jews in the post-Soviet space is higher than 50," says Dr. Kantorovich. "However, the younger generation of Jews developed a higher awareness of their Jewish identity, and there is a phenomenon of multiple identities - it is possible to be part of several worlds and to carry several identities, without giving up any of them. A situation is created in which young people begin to influence their parents, and the funnel of loss of Jewish consciousness turns another way."
Despite the challenges, Marina Yudborovsky sees a promising future for Russian-Jewish global community. “New generations of Russian speaking Jews combine enormous thirst for Jewish knowledge, deep appreciation of their identity, strong connection with Israel and worldwide network of personal and family ties. They can play a pivotal role in global Jewish dialogue between Israel and Diaspora, strengthening the unity of Jewish people.”