An Esther for our times 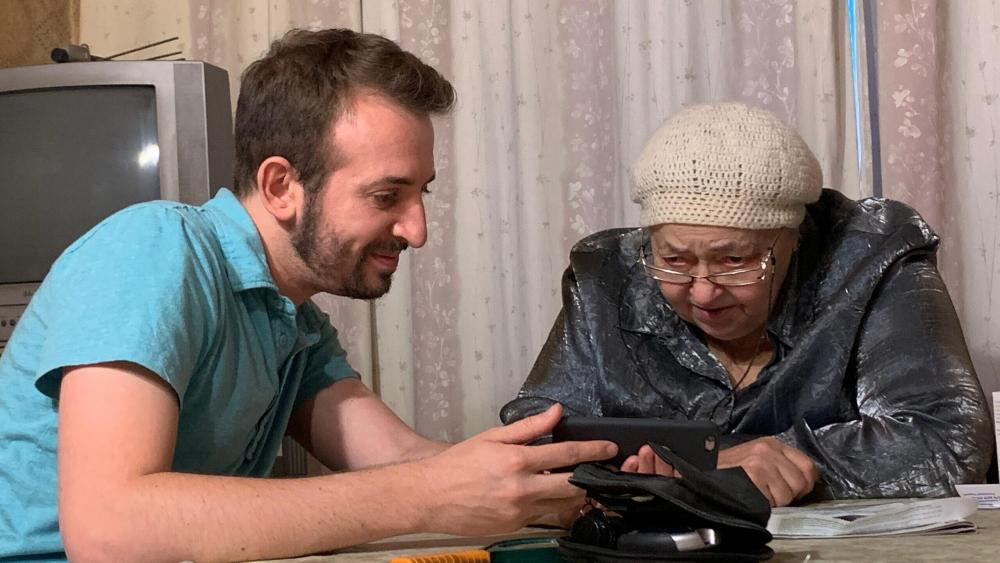 Asya was living a life against all odds. Like the courageous queen of the Purim story, she’s an example to those who struggle to balance the freedom to be Jewish with the responsibilities that decision brings.

“Was it useful?” That was Asya Shmushkevich’s question last spring as I played her the video on my phone.

Two years earlier, I’d interviewed her to spotlight the quiet crisis of tens of thousands of poor Jewish pensioners in the former Soviet Union, men and women who had “done everything right” but now lived on incomes as low as $2 a day, their golden years tarnished.

A physicist who’d put money into a government pension fund for years, Asya saw her retirement savings vanish when the Communist regime collapsed.

The granddaughter of a rabbi, she became a volunteer in the post-Soviet Jewish community of Kharkov, Ukraine, after she retired, teaching classes and running a women’s group until her health began to fail her. At that time, volunteerism was still frowned upon in a wider society emerging from communism, though it’s today experiencing a hard-fought renaissance within the Jewish community.Asya was sturdy, with a fearsome stare frequently betrayed by a hearty laugh. When I once told her that I didn’t smoke and tried to drink in moderation, her instant response was: “You’re probably making the right choices, but they’re boring.”

Simply put, she was a force, so it caught me by surprise when Asya posed her question; this 77-year-old titan suddenly seemed like a young girl.

“Do you think it helped?” she asked.

It cut me to the quick. For years, I’ve struggled with the complicated emotional arithmetic of interviewing homebound elderly Jews like Asya. Although we try to do it with compassion, my video team unavoidably barrels in like a circus, setting up lights in bedrooms, snaking microphones through housecoats, storing tripod bags and camera cases in the kitchen.

As their tiny Soviet-era apartments become pop-up film sets, I always wonder and worry: How good does whatever we produce have to be to justify all this commotion, and can we guarantee it’s all worth it? Now Asya was asking what I’d always imagined was a rhetorical question.

I answered her confidently: Yes, this was a deeply impactful video—philanthropic support, the use of the video in presentations, and a request from one fundraiser for her specific story made it resounding. They called her story “the physicist video,” even though there were other elderly and caregivers highlighted, too.“Good,” Asya said in a suddenly small voice. “I just want all of the suffering to mean something.”

In January, after returning from family leave, I inquired of my Ukrainian colleagues how Asya was doing. The email came quickly: “I gathered information regarding our clients, though after our visits, they are not just clients but people whose fate we can longer be indifferent to and whom we remember with warmth. I write with great regret and sadness that some are gone.”

Asya had died in December, her diabetes exacerbating a fall and setting off a chain of events from which she was unable to recover. I was struck by how deeply her death hit me. Here was this woman half a world away who I’d met three times but had become family, who in the deepest sense probably always was.In the former Soviet Union, you take your name from your parents. Asya was Asya Israelovna—Asya, daughter of Israel.

She took that commitment seriously: never changing her name in Soviet times even when it would have been easier to disguise her Jewishness, volunteering at her city’s Jewish institutions until she grew too sick, living a Jewish life—lighting Shabbat candles and buying kosher groceries with her home-care worker’s help—until her dying day.

To me, Asya was an Esther of her time, living a Jewish life against all odds. Like the courageous queen of the Purim story, she’s an example to those who struggle to balance the freedom to choose to be Jewish with the responsibilities that decision brings.

Asya knew that there are times in history where it’s countercultural to choose a Jewish life. Each Jewish holiday she celebrated—every Brezhnev Passover, each Gorbachev Purim—was a radical act, fraught with tension, fueled by faith.

As the inheritors of Asya’s legacy, we Jews across the world—facing an anti-Semitism many feel unprepared for—can make sure to follow her example. We can take the stories of Jews just like her out of the shadows of history and apply their lessons to our own lives.

It’s not enough for us to remember it can be difficult to be Jewish, in the past or even today. It’s our duty to lift up the joy and optimism of the next generation choosing Jewishness anyway.

Asya was born in Kharkov the year after Nazis invaded Soviet Ukraine. Before turning 2, she and her family were evacuated to the Russian city of Nizhniy Tagil, almost 1,500 miles away.

Today, that city is home to a chapter of Active Jewish Teens, the youth initiative that reaches more than 3,200 Jewish teens in 60 cities in seven former Soviet republics. It’s a program of my organization, the American Jewish Joint Distribution Committee or JDC, and supported by partnerships with BBYO and the Genesis Philanthropy Group.

Each week, about 20 Nizhniy Tagil teenagers meet to plan holiday celebrations, brainstorm volunteer projects and celebrate their Jewishness, passing that pride onto their friends and people in their parents’ or grandparents’ generation.

I wonder what Asya would make of it. I’m pretty sure she’d be cheering them on.

This Purim, Jews worldwide will read the Megillah, the story of Queen Esther’s bravery and the defeat of the wicked Haman, who sought our destruction. There’s a tradition to drown out Haman’s name with noisemakers and boos. My synagogue uses a traffic-light system: Stay quiet when it’s red, go wild when you hear his name and the light turns green.

I like our Jewish approach. We haven’t excised our demons from the canon. We still say Haman’s name. We’ve just decided that he’s not the most important part of the story.

Choosing a Jewish life and proudly wearing that identity—for Asya, for the teens in Nizhniy Tagil, for all of us—isn’t about living with blinders on. It’s about taking in a frightening world and deciding something else matters more.

By Alex Weisler, a video producer and digital storyteller at JDC, the global Jewish humanitarian organization.