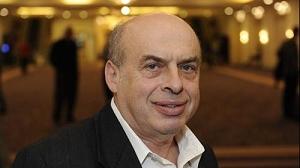 The boycott campaign is more dangerous for diaspora Jews than for Israel, according to the chairman of the Jewish Agency, Natan Sharansky.

While its impact of BDS on Israel’s economy or cultural relations was non-existent, it threatened to discourage diaspora Jews from openly identifying with the Jewish state, Mr Sharanksy told the audience at Monday’s event at JW3 in London.

The former refusenik said the campaign against Israel was leading some young Jews to believe it was not good for their career to be “publicly associated” with the country.

“I see how our opponents, not to say enemies, are successful in bringing this feeling of uncertainty,” he said. “That is the danger and we have to fight it.”

In the discussion with the Ukrainian-born Jewish philanthropist Mikhail Fridman, Mr Sharansky argued there was growing mutual dependence between Israel and diaspora Jewry.

But Mr Fridman disagreed with the analysis, instead saying that “mutual dependence was diminishing”.

This was partly because the world was more friendly to Jews and diaspora Jews felt more comfortable where they lived. While Israel could survive without the diaspora, Mr Fridman said, diaspora Jews had “a temptation to disappear” through assimiliation.