During one night: Over $32 million raised for IDF soldiers 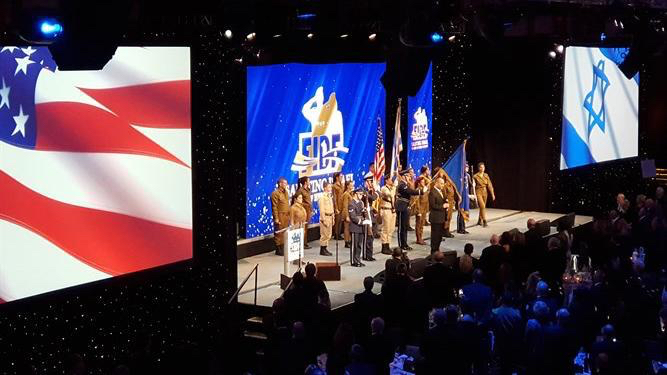 1,200 leading business people and philanthropists from across the country saluted Israel’s brave soldiers and veterans at the Friends of the Israel Defense Forces (FIDF) National N.Y. Gala Dinner on Wednesday at the New York Hilton Midtown, which raised more than $32 million to support well-being and educational programs for Israel Defense Forces (IDF) soldiers.

IDF Chief of the General Staff Lt. Gen. Gadi Eisenkot was expected in attendance as well, but due to an early-morning rocket attack on Be'er Sheva on Wednesday, he immediately returned to Israel.

Renowned Israeli singer and former “X Factor Israel” television personality Shiri Maimon , who recently starred as Roxie in “Chicago” on Broadway, performed together with soldiers of the IDF Musical Ensemble, as well as with two of her own songs.

Highlighting the unique cooperation between the United States and Israel, Brig. Gen. Tal Kelman, Head of the Strategic Division of the IDF Planning Directorate and former Chief of Staff in the Israeli Air Force (IAF), discussed working together with U.S. Air Force soldiers during the Juniper Cobra joint military exercise earlier this year. He was joined on stage by Cpt. Or, the first female soldier to command a Patriot Battery, who recently employed an advanced air defense system to shoot down the Syrian airplane and drone that invaded Israeli airspace this past July.

Honored guests also included 30 IDF soldiers and officers from several military units, including Staff Sgt. Bar, a paramedic who treats wounded Syrian civilians along the border with Israel as part of the IDF’s “Operation Good Neighbor”; and Maj. Or Ben-Yehuda, who served in the Caracal Battalion, one of the only co-ed military units in the world, and her mother, Prof. Dina Ben-Yehuda, who shared their story of heroism passing on from generation to generation. Dina served in the IDF during the 1973 Yom Kippur War, and Or in 2014 single-handedly fought off a group of terrorists and was awarded for her courageous actions. IDF combat veterans who are now FIDF IMPACT! Scholarship recipients were also in attendance.

“Since its birth 70 years ago, Israel has continuously fought for its right to live as a free country in the Middle East. A true ‘Start-up Nation,’ Israel not only survives but thrives, with accomplishments and innovations that greatly contribute not only to her own citizens, but also to the rest of the world,” said Klifi-Amir. “The success of the state of Israel is rooted in many factors, most importantly resting on two pillars; a strong IDF – one of the best militaries in the world, with the highest moral and ethics, and the strong bond between Israel and the great United States of America. Standing together is the most powerful way to continue to thrive, flourish, and face the challenges yet to come. We were honored to have so many highly distinguished guests join us at this momentous annual gala, as we celebrated 70 years of Israel and saluted the heroes of the IDF.”

For the fourth year, FIDF’s flagship national event was chaired by Weintraub. A Reform rabbi and businessman from Westchester, Weintraub has been an avid FIDF supporter for over 17 years and has sponsored academic scholarships for more than 85 IDF combat veterans through FIDF’s IMPACT! Scholarship Program.

“The miracle called Israel has continued to exist as a strong and thriving country over the past 70 years, and it will continue to exist thanks to the heroic soldiers of the IDF, who put their lives on the line every day to defend the home of the Jewish nation. I am proud to chair this extraordinary event and salute Israel’s soldiers for their countless sacrifices, historic victories, and commitment to our people,” said Weintraub.

Funds raised at the gala will provide much-needed and well-deserved services such as academic scholarships to combat veterans, financial assistance for soldiers in-need, support for Lone Soldiers throughout their service and upon release, crucial aid for wounded veterans and the families of fallen soldiers, weeks of rest and recuperation for entire IDF units, as well as educational, cultural, and recreational facilities. The evening presented a rare and exclusive opportunity to pay tribute to the state of Israel and its brave men and women in uniform.