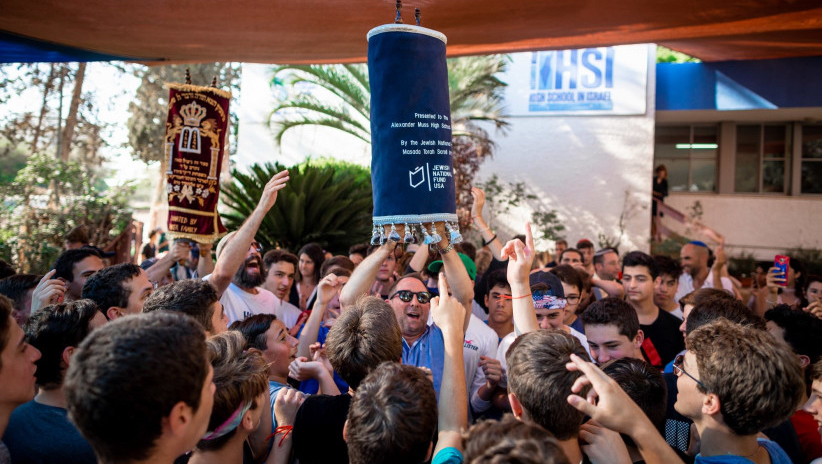 For nearly 50 years Alexander Muss High School in Israel (High School in Israel) has been providing thousands of students in grades 10-12 the opportunity to come to Israel to participate in a pluralistic college-prep American high school semester abroad experience that allows them to learn 4,000 years of Jewish history while preparing them for their academic, personal, and spiritual lives. Since 2003, the school has been operated by JNF-USA.

“JNF-USA has always been about connecting Jewish people in the United States with the land and people of Israel,” said JNF-USA Chief Executive Officer, Russell F. Robinson. “Our Zionist mission is part of our DNA.”

In addition to general studies courses (which can include advanced placement-level classes, as well as a wide range of literature, science, and language courses), students travel all over Israel, using the land as a living classroom in which they learn about the history, culture, and language of the Jewish state. Students enrolled in a full-semester program also travel to Poland and take a three-day hike across Israel from the Mediterranean to the Sea of Galilee.

“Our high school in Israel allow[s] those young people to come back from Israel at or above their academic levels of their general studies,” Robinson said, noting that High School in Israel will not only offer them (as it does all students) a resume builder for the finest universities, but also what he sees as “an engagement of loving, living, and being part of the land of Israel which will strengthen our Jewish community today and tomorrow!”

Recently, a growing cohort of students from the Russian Speaking Jewish community have been attending High School in Israel.

“Our focus on the Russian-speaking Jewish community is based upon a shared vision and objective,” Robinson explains. “The Russian-speaking Jewish community…is one of the most educated communities per capita. They insist that their educational systems are the best and that their children are able to elevate themselves to the finest colleges and to the finest professions.”

“They are so inventive and creative,” adds JNF-USA’s Executive Director of National Major Donor Advancement Marina Furman, “so we thought it was a good time to actively reach into the community and try to engage them in our movement.”

Although many of the Russian-speaking participants have what Furman sees as “very strong ties to Israel,” Furman and her colleagues at JNF-USA realized that few of them had opportunities to participate in any kind of long-term programs of study in Israel. As a result, Furman suggested, many lacked what she calls “identity knowledge.”

“We saw a thirst for that,” Furman recalls.

As his organization enjoys a contact list of hundreds of thousands of devoted donors and affiliates and an administration system that Robinson touts as “second to none in the nonprofit world,” JNF-USA was able to find appropriate and effective partners with whom to strengthen their programming for students while also finding new students to attract.

First among them was Genesis Philanthropy Group (www.gpg.org), an international family of foundations focused on strengthening Jewish identity among Russian-speaking Jews, supporting significant Jewish organizations around the world, and strengthening bonds among Jews in Israel and the diaspora.

“One of GPG’s aims is to provide opportunities for American youth with Russian-Jewish backgrounds to better understand Jewish and Israeli history and culture,” explained Genesis Philanthropy Group CEO Marina Yudborovsky, “as well as explore their personal roots and connections to the global Jewish community.”

“The program has had a profound effect on all students,” Furman adds, “but it has been really life-changing for students from the Former Soviet Union because they have so much less exposure to the history of Israel and to Hebrew and also to the other students who are on the same journey.”

According to Yudborovsky, the study abroad program at High School in Israel allows participating students to both learn about their heritage and develop leadership skills to help them to become informed and passionate members in their local communities.

As a great part of Russian culture involves close family ties, Furman noted that many of the students who participate in the High School in Israel program bring what they have learned home and so educate and inform a greater community.

“For one student to go and learn will have a huge impact on 20-30 people by sharing their knowledge and passion,” she says
With this in mind, Furman sees the new focus on Russian-speaking students to be not only a boon for the students themselves, but for the generations of Russian-speaking Jews who were raised with limited access to Judaism.

“We are hoping to change the trajectory of the Russian-speaking community by having the children educate their parents,” Furman said, noting that the partnership also supports parents by offering participating students a scholarship of up to $10,000 thanks to the generosity of the Genesis Philanthropy Group and JNF-USA.

A further benefit of the program and the scholarship has been that many American Jews who were involved in the Free Soviet Jewry movement can continue to support this same vital community.

Though Muss already had years of experience and great success inviting and encouraging students to come and learn in Israel, Robinson wanted to improve the school’s infrastructure and provide mechanisms to follow up with students and maintain its profound impact throughout their lives. This is why JNF-USA recently developed a program called From Birth to the Boardroom that continues to engage and support High School in Israel students throughout their college experiences and careers in order to encourage and inspire them to be involved in the organization and Jewish life.

“It is important for the American Jews who were involved in helping Jews to get out of the Soviet Union to know that we didn't stop there,” Furman says.

“We know that the students that go to High School in Israel are our future leaders and will bring others along and keep the strength and the growth of our Jewish community for years and years to come,” Robinson says. “This gives that investment of dollars a rippling effect greater than any other program!”