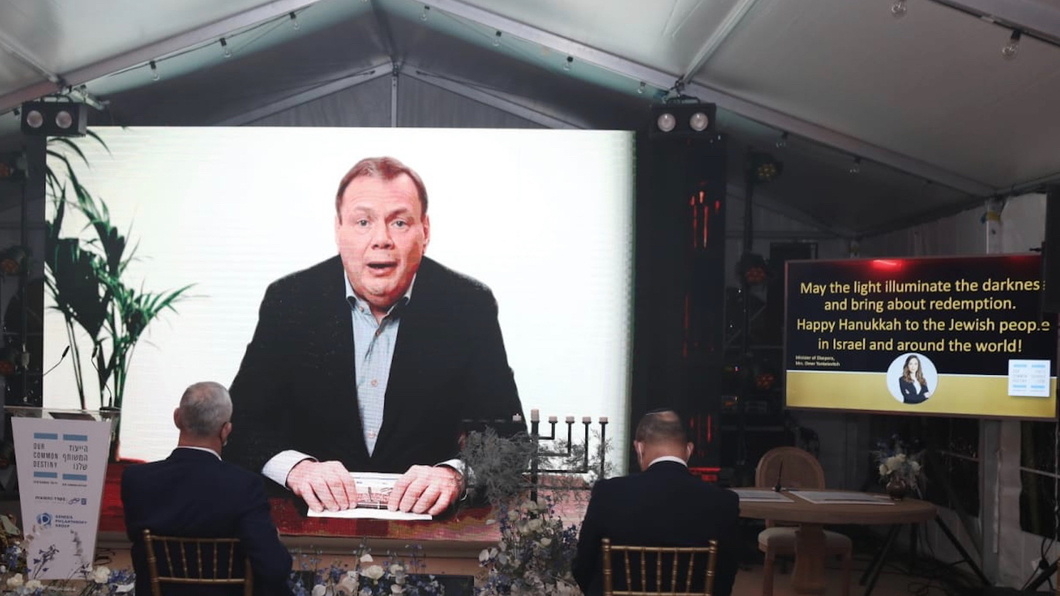 The Our Common Destiny scroll project is a joint initiative of Genesis Philanthropy Group and the State of Israel, under the auspices of President Reuven Rivlin.

The launch of the “Our Common Destiny” scroll took place on Monday evening at the Tower of David Museum in Jerusalem, in the presence Alternate Prime Minister Benny Gantz and with an appearance via Zoom by Prime Minister Benjamin Netanyahu, who is in quarantine after coming into contact with someone infected with the coronavirus.

The project was created to emphasize and strengthen the ties between Israelis and world Jewry, through creating a document that defines common values for Jews from all over the world.

In addition to Netanyahu and Gantz, the ceremony was held in the presence of Jerusalem Mayor Moshe Lion; Minister of Diaspora Affairs Minister Omer Yankelevitch; chairman of Yamina Party Naftali Bennett; Dorit Golender, the vice president for community relations of the Genesis Philanthropy Group; and project director Sivan Aloni. Mikhail Fridman, an international businessman, investor and philanthropist, who is a co-founder and trustee of Genesis Philanthropy Group, spoke via Zoom.

The launch took place about a year after Rivlin inaugurated the scroll and it was sent out among Jewish communities around the world. The event was accompanied by an interactive audio light show on the walls of the Old City of Jerusalem and featured a performance by singer/songwriter Amir Benayoun.

The attendees who spoke signed the scroll and praised its goal of fostering Jewish unity all around the world. Lion lit the Hanukkah candles and recited the holiday blessing, saying it was fitting that the scroll would be signed in Jerusalem, “a city that shines light all over the world,” and at a time when historic peace agreements have just been signed between Israel and countries all over the world.
Netanyahu said he would have preferred to appear in person but was happy to take part in any case. “I do not turn a blind eye to the challenges. There are still dangerous phenomena of racism and antisemitism. We are committed to fighting them resolutely, fearlessly.

But the light is infinitely greater than the darkness,” he said. “Together we will continue to strengthen the solidarity between Israel and the Diaspora, and between the Diaspora and the Diaspora. Together we will turn the letters of the scroll we signed into the building blocks of Eternal Israel.”Gantz spoke about challenges facing the Jewish people, including the coronavirus and the economic crisis that it has caused, and said that the need for unity was greater now than ever, and praised those who initiated the scroll project.

Yankelevitch said: “The Jewish light is still lit. It is time that the Jewish people come together from all over Israel and around the world.”
Bennett spoke about how his American father grew up in San Francisco without feeling a strong connection to Israel or Judaism but said that changed after the Six Day War, when his parents felt engaged in Israel’s struggle and headed for Israel. He did bring some politics into the event, saying: “These are tough political times in Israel,” a clear reference to Gideon Sa’ar’s announcement that he was starting a new political party that would run in the next elections. But he said unity would triumph: “Fierce arguments? Certainly! Boycotts against each other? No! We are one people. And we will remain one.”

Fridman, via Zoom, said: “There is no cure for the pandemic of alienation among Jews,” other than promoting Jewish unity around the world and saying that the scroll would play a role in fostering unity.