FolksbienRU’s ‘DOM №’ Is A Cool And Immersive Passover Event 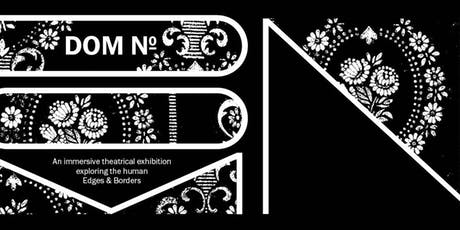 But Is It For English Speakers?

Perhaps because I lack some self-awareness, I rarely feel like an outsider in my Spanish Harlem neighborhood. But last Friday night, I arrived at a secret location one block from my apartment and found myself thoroughly bewildered by surroundings that should, by rights, be more familiar to me.

FolksbieneRU, (a Russian-centered partnership initiative of Genesis Philanthropy Group and National Yiddish Theatre Folksbiene), and the experimental theater group the Lost & Found Project set up shop in a loft above a discount women’s clothing store for their latest project, “DOM №,” which ran April 12 and April 13th. This immersive theater show, conceived by Lost & Found’s Rebecca Karpovsky and Anya Zicer, promised to provide viewers with a Passover-timed meditation on slavery and freedom through the trappings of the USSR.

At the door, I was admitted by a woman in a cloche hat and an accent redolent of Soviet-era privation, who prompted me to cough up a password emailed to me two days before. From here I mounted a flight of stairs and was greeted by a pantsless man seated behind a tinfoil TV frame who told me and the other visitors not to speak. Well-trained by two visits to “Sleep No More,” I obliged.

Buzzy electric atmospheric played the crowd in as a woman in a babushka, sweeping the floors, bid me take my shoes off and provided me with a pair of leather loafers. As I stepped into the space in footwear that hardly fit me, I saw a young woman in a nightgown lounging near a rotary phone. The women behind me, immediately disregarding the pantsless man’s gag order, began speaking to her in Russian. Everyone spoke Russian. This event was, in fact, a Russophone convention.

Walking at my leisure through the various partitions of the room – split up by curtains and the space’s natural divisions (enviable New York bedrooms) – I felt palpably what Brecht translator John Willet termed the Alienation Effect.

In essence, the A Effect describes the theatrical process of making the familiar appear strange to an audience as a way of distancing them from a play’s emotions to better consider its social message. From my vantage, everything was strange and that proved to be the prevailing motif. The woman with teased hair and knee-length woolen socks who sang folk songs in the kitchen: Weird. The doctor administering physicals to the audience: Weird. The trio of dancers flailing to a DJ: Weird times three. But I wondered if it was half as weird for my Russian-fluent fellow travelers. Maybe to them, it was, familiarly strange in the way Brecht intended.

To one side of the room a man in drab teacherly mufti showed slides of some Soviet parable involving workers and machines (I think). Members of the audience chimed in with questions and comments as he gave his lesson and distributed blue books with Cyrillic inscriptions. At the buffet table I witnessed some middle-aged men and women expertly plate and consume whole pickled vegetables which were bobbed in jars like science experiments.

I searched for clues to a narrative in my native English wherever possible. Occasionally, posters in English would stress a theme like “Sacrifice,” “Memory,” “Slavery,” “Punishment” and “Freedom” with their allusions to classical thinkers and broad, oblique lines of inquiry. “Can one person truly belong to another as property?” “What is freedom?” “There is no glory in punishing, but is it a necessity?”

Slumping down to a pair of headphones on one side of the room, I found myself pleased to hear the voice of James Baldwin opining in English on race in America. Baldwin, who left the United States for France, was presented in an audio montage alongside exiled poet Joseph Brodsky and Sylva Zalmanson and Eduard Kuznetzov, a married couple who tried to flee the Soviet Union for Israel by hijacking a plane. In another corner, guests were invited to record their own reflections on freedom into a microphone.

I stayed mum, hoping to work out resonances to Passover beyond the larger questions of agency, dignity and state control. Was the woman sweeping at the door banishing hametz? Did I misread the dynamic dancers (two male, one a woman) as being part of a love triangle when in fact they were meant to be Miriam, Aaron and Moses? Was I, my speech impeded, meant to be Moses? If so, where was my Aaron?

As I tried to square my experience and insights against a language barrier as leaden as an Iron Curtain, I found myself caught up in the action.

The young woman who had been pacing with her rotary phone for the past hour padded down the room and announced, in a clarion call of English, “My phone is ringing!” The cast and audience gathered around her. A cast member urged me to sit on the floor and then, just as suddenly, stand as the company set down a table.

They placed chairs near me and I soon found myself as the lone civilian in a Last Supper-like tableau with the players. The dancer next to me said something about “the sign of the cross.” A platter appeared and I thought I’d have the opportunity to receive my Pesach conclusion, dip some bitter herbs and make some Hillel-style sandwiches. Alas, the tray merely bore shot glasses and we toasted. I was relieved to discover it was water.

Like that the evening ended. At least for me. Many stuck around to enjoy libations and chatter in their mother tongue. Freed, I collected my shoes, left the way I came and returned to my familiar block, my mind probing a particularly theatrical notion of bondage: that of a captive audience.