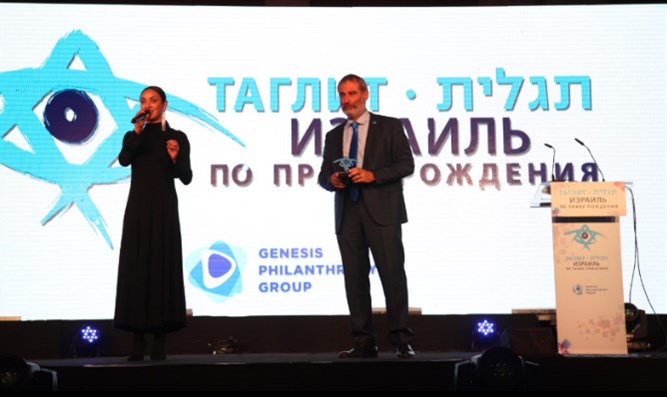 The event, held at “The International Convention Center – Binyenei Ha-Uma” in Jerusalem, in the presence of Defense Minister, Mr. Avigdor Liberman, BRI’s International CEO, Mr. Gidi Mark, President and CEO of the Genesis Philanthropy Group, Mr. Ilia Salita and other donors and supporters from Jewish communities around the world.

During the event, which is a part of a wide cooperation between BRI and the Genesis Philanthropy Group in Israel, the participants enjoyed a variety of lectures given by Russian speaking cultural figures, among them: Anna Aronov, Yevgenia Dodina, Avi Binyamin, Tamara Klingon and Sasha Prilutzky, who shared their success stories and their connection to Israeli works of music, art and literature.

For most of BRI’s Russian speaking participants, the ten-day trip in Israel marks more than just their first visit in the country, but also gives them an opportunity to discover the cultural capital of Israel and to take this experience and pass it on in their communities back home.

The participants of this event join almost 50 thousand Russian speaking Jews that already helped us fulfill the vision of building a bridge between Israel and the Jewish communities around the world. We are glad to provide an opportunity for the younger generation of the Jewish people to familiarize themselves with modern Israel’s diverse culture, society and innovation, in addition to the Jewish & Zionist history and legacy.”

President and CEO of Genesis Philanthropy Group Mr. Ilia Salita: ”Continuous innovation and pluralistic spirit make Birthright Israel one of the most inviting options that the Jewish community can offer its young generation, on their journey to explore their legacy. Genesis Philanthropy Group is thrilled that, every year, its long-standing partnership with Birthright Israel provides thousands of young Russian-speaking Jews from across the globe with an opportunity to strengthen their Jewish identity and to discover their love for Israel.”

“As the President of The Euro-Asian Jewish Congress, I am glad for the opportunity to take part in this important event, bringing together the State of Israel and young Jews from the diaspora. Birthright Israel’s participants get a special glimpse into our historic homeland, its rich past and promising future. Whether this trip remains a brief experimentation or becomes a meaningful part of their being and identity- is up for each participant to determine on his own. What matters is that every Jew, wherever he may be, will have a place reserved in his heart for Israel and for his connection with his people. Our vast heritage and unique culture are the shared basis we can build our individual and collective future on”, Said Mikhael Mirilashvili, president of The Euro-Asian Jewish Congress, representing Jewish communities in the FSU, including Russia & Ukraine.

Taglit-Birthright Israel connects young Jews to the State of Israel as well as to their Jewish identity through a free ten-day educational tour of the country. Over the past 18 years, Taglit-Birthright Israel has opened the eyes of hundreds of thousands of trips participants to the people and the land of Israel. The trip aims to build an understanding, friendship, and lasting bond with the land and people of Israel and to reinforce the solidarity of the Jewish people worldwide.

Since its inception in 1999, over 600,000 Jews from over 66 countries have participated in the free 10-day educational tour of Israel. Of these over 90,000 young Israeli soldiers (from prestigious units of the IDF) and students have joined various groups on their tours. Over the years, several studies have been conducted at Brandies University, located in the USA, demonstrating the lasting effect on Diaspora Jews when focusing on their Jewish identity, their connection to Israel and their ability to promote the country.

Genesis Philanthropy Group is a private foundation, founded by the international businessmen, investor and philanthropist, Mr. Michael Friedman, along with his business partners. The foundation’s mission is to develop and enhance a sense of Jewish identity among Russian-speaking Jews worldwide by supporting and launching projects, programing and institutions that are focused on ensuring that Jewish culture, heritage and values are preserved in Russian-speaking Jewish communities.