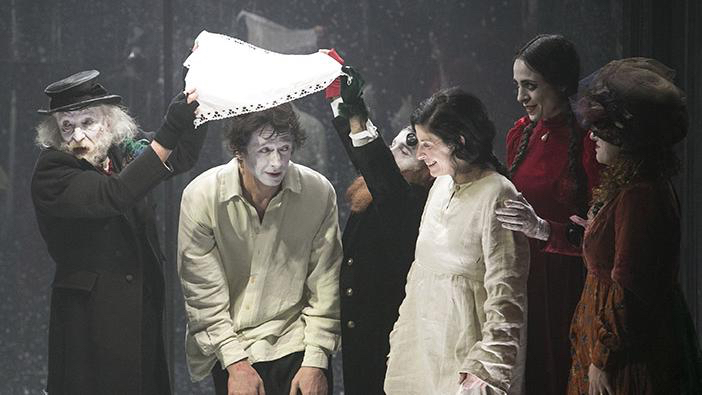 The Gesher Theatre, founded in 1991 in Tel Aviv by director Yevgeny Arye, will return to the US and Canada with its two leading productions...

The Dybbuk and In the Tunnel. This North American tour, which includes performances in Toronto, New York City, and Pittsburgh, is in honor of the 70th anniversary of the State of Israel.

The Gesher Theatre delegation includes more than 40 actors and theatre creators – among them, the theatre’s Artistic Director Yevgeny Arye, the Director General Lena Kreindlin, the Chief Dramaturge Roy Chen, along with and the theater’s leading actors.

The company begins its tour with a new production by Roy Chen, Gesher Theatre Chief dramaturge, inspired by the well-known play: The Dybbuk, or Between Two Worlds by S. Ansky–in a modern version. The Dybbuk, written in 1913, arguably the most iconic play of the entire canon of Jewish drama. The play tells the story of a Hasidic woman who became possessed on the eve of her wedding by the dead spirit of her beloved, a young scholar whom her father forbade her to marry. The esteemed Gesher Artistic Director Yevgeny Arye directs the cast of 25.

The Dybbuk will be followed by the political satire In the Tunnel, also by Mr. Chen, inspired by the Best Foreign Language Oscar-winning film No Man’s Land by Danis Tanovic. In the play two Israeli soldiers and two Palestinians are trapped in a tunnel dug by Hamas between Gaza and Israel. Enemies snared in a mousetrap, they try to find their way out. Should they kill or save each other? Meanwhile, above ground, a political and media circus is taking place attempting to capture and cover the event. The cast of nine is directed by award-winner Irad Rubinstein. In the Tunnel sets out to ask if there a light at the end of the tunnel and a hope for this conflict to end. In this theatre, the audience gets the chance to vote and determine the end of the play. Can theater reflect and examine reality in real time? Whether the play will end in an optimistic or more pessimistic note, in this show, only the audience can tell.

The Dybbuk and In the Tunnel will be performed in Hebrew with English and Russian supertitles.

Gesher Theatre was founded in 1991 by director Yevgeny Arye and a troupe of actors from Russia, who in pursuit of artistic freedom, immigrated to Israel from Moscow. In the first ten years of its existence, the theatre served as one of the few bilingual theatres in the world, staging every play both in Hebrew and in Russian. Nowadays, Gesher Theatre performs solely in Hebrew, while still maintaining its close ties with the Russian culture and heritage.

Over the years and under Arye’s leadership as Artistic Director, the Gesher Theatre has won a place of prominence in the Israeli cultural scene as well as in the international arena. In 27 years of existence, Gesher Theatre has created more than 100 theatre productions which have won numerous awards and appeared on the world’s most prominent stages and festivals. As befits its name, which stands for “bridge” in Hebrew, Gesher Theatre sees its goal as being a source of integration in Israel multicultural society, promoting new generations of young theatre artists and presenting a repertoire composed of world classics alongside well-known texts from Jewish literature. All this while maintaining uncompromising artistic excellence along with an ongoing search for new and challenging theatrical languages.

As part of Gesher Theatre international tours (in China, Germany, France, England, Italy, Moscow, Colombia, among others), The Theatre was last seen in the U.S. in 2013, where the Cherry Orchard Festival presented the company in Enemies: A Love Story, based on the novel by Isaac Bashevis Singer and adapted by Roy Chen, at Jazz at Lincoln Center’s Rose Theater.

Previous New York productions include: Tom Stoppard’s Rosencrantz and Guildenstern are Dead at BAM (1992); Joshua Sobol’s Village and Adam Resurrected, by Alexander Chervinsky, based on the novel by Yoram Kaniuk, at Lincoln Center Festival (1998); The Dreyfus File by Jean-Claude Grumberg (2001); The Slave and Shosha, based on works by Isaac Bashevis Singer at Lincoln Center Festival (2004); and Momik, based on David Grossman’s novel See: Under Love, at Borough of Manhattan Community College (2008).