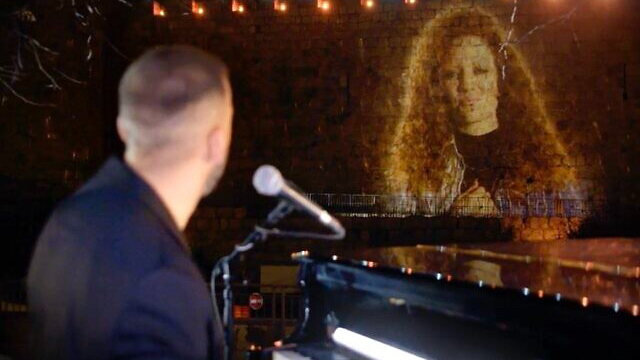 Israeli musician and British grammy winner projected onto the walls of the Jerusalem Old City at Illuminate: A Global Jewish Unity event.

A ‘roadmap’ to boost boost links between Israel and Diaspora Jews has been endorsed by Reuven Rivlin at a Jerusalem ceremony featuring Grammy winner Jess Glynn.

Israel’s head of state backed the ‘Declaration of Our Common Destiny’ during a virtual event on Thursday night, during which the British-Jewish Grammy winner’s image was projected onto the old city walls, alongside Israeli star Idan Raichel.The declaration, initiated by Genesis Philanthropy Group (GPG) to lay out a ‘roadmap for the Jewish future’, is intended to halt the drift between Israeli and Diaspora Jews, and “prioritise common ground”, amid a warning of “alienation and indifference” between Jews in and outside Israel. The venture has had the input of tens of thousands of Jews around the world through an online survey.

At the ‘Illuminate: A Global Jewish Unity’ event‘, President Rivlin called “upon all of our brothers and sisters in Israel and around the world to respond to this call for unity, for dialogue, for mutual responsibility”.

He urged Jews around the world to “join us in this dialogue that’s based upon mutual respect, good will and the search for common ground and common destiny”.

It was also signed by  Mikhail Fridman, the co-founder and trustee of GPG, which launched Our Common Destiny initiative in partnership with the Israeli Ministry of Diaspora Affairs, under the auspices of Rivlin’s office.

President Reuven Rivlin displays a copy of the Declaration of Our Common Destiny, which he endorsed today, alongside Israeli Diaspora Affairs Minister Omer Yankelevich. From left to right: Our Common Destiny Project Director Sivan Aloni; Genesis Philanthropy Group Vice President Dorit Golender; Israel’s President Reuven Rivlin; Israeli Diaspora Affairs Minister Omer Yankelevich; and Diaspora Affairs Ministry Director-General Dvir Kahana. (Photo Credit: Mark Neyman/GPO)
Fridman said: “While Jewish communities around the globe battle COVID, we are also plagued by another disease, which began long before the pandemic and shows no signs of recovery. This ailment of discord, of conflict, of ever-shrinking common ground threatens the very survival of Jewish peoplehood. I fear that for the first time we are facing the real risk of losing the meaning of the basic tenet of our existence – mutual responsibility.

Genesis Philanthropy Group Co-Founder and Trustee Mikhail Fridman (shown speaking) was among those who participated in today’s event and signed the Declaration of Our Common Destiny, joining thousands of Jews worldwide who have also signed the global Jewish unity document and roadmap for the Jewish future.

“Those who sign the Declaration” he said, “sign a contract with themselves and with our people. This contract must be fulfilled through action – a determined effort to improve our unity, to find new ways to help and contribute to each other, to learn from each other, to listen – really listen – to each other.”

Our Common Destiny CEO Sanford Cardin said the declaration “will shape how the Jewish people relate, empower, and engage with one another now and for generations to come”, adding that “Jewish unity has always found its expression in Jewish efforts for a common good”.