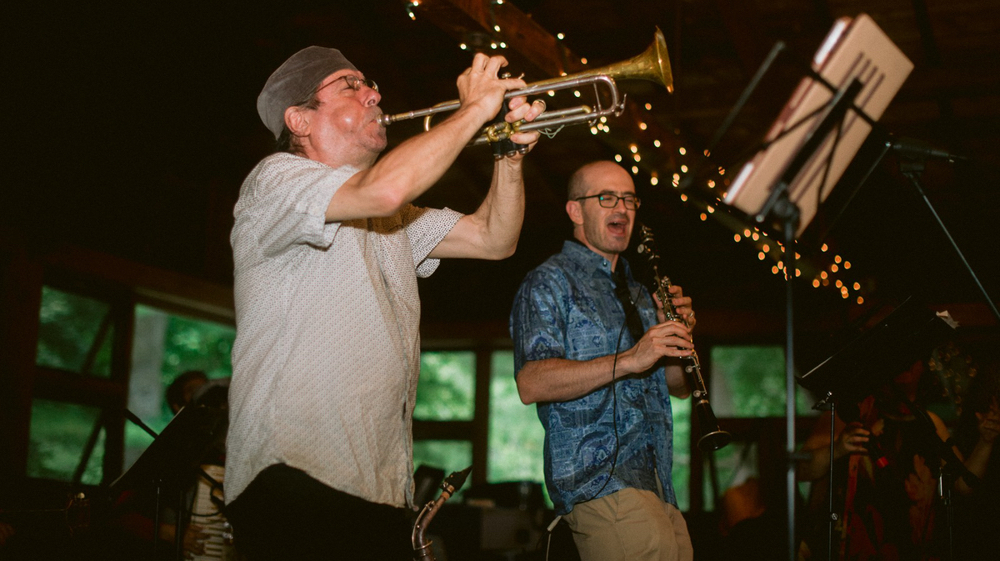 Harris, CEO of the American Jewish Committee, was speaking Sunday under a big white tent...

in leafy Westchester County, one of a dozen lecturers, musicians, authors and rabbis.

David Harris grew up in a Russian-speaking home in New York and was raised to hate communism.

In 1974, he was among a handful of Americans allowed to live and teach in the Soviet Union — an experience that left an indelible mark on his life. It set Harris on a career arc that eventually would land him atop one of American Jewry’s most storied and powerful organizations, the American Jewish Committee.

“In December 1987, Gorbachev came for his first visit to the US, and we had 36 days to prepare a demonstration. We met him with 250,000 people in Washington,” Harris recalled of his early days as an activist. “The next day, Gorbachev met Ronald Reagan in the White House. Reagan said, ‘Let them go.’ Within a year or two, the doors were open and more than a million people left.”
Harris, CEO of the American Jewish Committee, was speaking Sunday under a big white tent in leafy Westchester County, one of a dozen lecturers, musicians, authors and rabbis at Limmud FSU’s first face-to-face North American event since 2019.
Advertisement

“The power, experience, resilience, courage and passion of Jews from the Soviet Union that I have met over the last 47 years is needed today here in the United States by the American Jewish community more than ever,” Harris said. “We are facing an entirely new situation in this country. Things are changing here rapidly and we need your voice. We need your fearlessness.”
The gathering, held at a forested Girl Scout retreat about 45 minutes north of New York City, attracted more than 150 Russian-speaking Jews for a full day of Jewish learning and artistic performances. Among the featured speakers: Yehuda Sarna, chief rabbi of the United Arab Emirates; Peter Weintraub, board chairman of Friends of the IDF; Christian pastor Dumisani Washington, founder of the Institute for Black Solidarity with Israel; Israel Nitzan, acting consul general of Israel in New York; Zohar Vloski, KKL-JNF Israel emissary for education in the USA; and Menachem Kaiser, author of the book “Plunder: A Memoir of Family Property and Nazi Treasure.”

Among other highlights of the day: a Russian-Hebrew songfest by Gera Sandler and Ronit Asheri, and a concert by the nine-piece klezmer band Romashka, which concluded with Inna Barmash’s rousing rendition of “Bei Mir Bist du Schein.”
The one-day festival was a sign not just of the strength and breadth of Russian-speaking Jews in the Northeast, but of a return to a semblance of normalcy after more than a year of pandemic limitations, said Limmud FSU’s chairman, Matthew Bronfman.

“This is our second first,” he said. “Last month we returned to face-to-face programming in Moscow, and this one-day event in New York is an important step on our path to a full return to annually impacting thousands of Russian-speaking Jews.”
Another festival is scheduled for later this month in San Francisco.

“It was great to get together, to finally be outside and enjoy the atmosphere, especially after the self-isolation of the pandemic,” said Tatyana Segal, 49. “I felt liberated. I liked seeing friends I knew, meeting new people and enjoying Israeli music.”
Segal, originally from the Ukrainian town of Khmelnitsky, immigrated to the United States in 1989 via Vienna and Rome and now lives in Brighton Beach, Brooklyn. As an attorney specializing in elder care, she helps low-income clients with housing and health care issues.

Estee Bardanashvili moved to New York in 1995 from Batumi, a Black Sea resort in the former Soviet republic of Georgia. The Queens resident is a senior director at Sesame Workshop, which produces the kids’ TV show “Sesame Street.”

“I love Limmud events in general, but particularly today’s because the topics were so interesting and diverse,” she said. “It was so meaningful to me because after a year and a half of COVID we could finally be together.”

Since the first conference in Moscow 15 years ago, Limmud FSU has put on over 75 events by 13 volunteer teams. Chaim Chesler and Sandy Cahn founded the organization, which has been led by Bronfman and President Aaron Frenkel since its inception. In all, some 70,000 Russian-speaking Jews across the globe have participated in the group’s events.

Sarna, the UAE rabbi and executive director of New York University’s Bronfman Center for Jewish Student Life, sounded a positive note at the event here speaking about the recent normalization of ties between Jerusalem and Abu Dhabi.
“Changes have been on slow boil for the last several years, but the Abraham Accords are dramatically changing the Middle East,” Sarna said.

About 1,000 Jews live in the UAE, according to Sarna, nearly all in the country’s two main emirates, Dubai and Abu Dhabi. In February 2019, the government announced the construction of an Abrahamic Family House in Abu Dhabi to consist of a church, synagogue and mosque, all the same height. In addition to the complex, which is set to open in 2022, the UAE now has a permanent Holocaust exhibition at Dubai’s Crossroads of Civilization Museum — the first of its kind anywhere in the Arab world.
“This is rooted not only in a desire to understand the Jewish community, but also to combat Islamic extremism,” Sarna said. “For the UAE, tolerance is not just a value but a matter of national security.”

Seeing so many people gathered at the weekend festival was a powerful communal experience, said Marina Yudborovsky, CEO of the Genesis Philanthropy Group. Genesis Philanthropy Group was among the event’s donors along with the Claims Conference, the Jewish National Fund (KKL), UJA-Federation of New York, the Blavatnik Family Foundation, philanthropists Diane Wohl and Tom Blumberg, and others.

“Limmud FSU is a unique model of Jewish engagement through meaningful conversations about Jewish culture, heritage, art, science, history and modernity powered by volunteerism,” Yudborovsky said. “After a pause due to the pandemic, it is incredibly exciting to see it revived.”