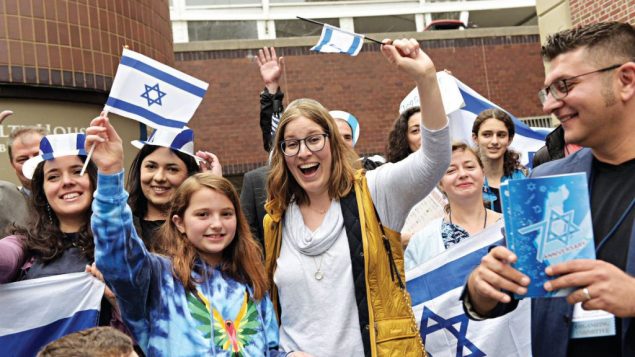 convening at the prestigious Columbia University in the centre of Manhattan.

More than 400 young adults came from far and wide to hear from business, thought and religious leaders, as well as others, with a special session by world-renowned lawyer Professor Alan Dershowitz, addressing the Israel boycott campaign.

Among these were a panel with the businessman and philanthropist Leonard Blavatnik, a session by the outspoken transgender activist and former Chasidic rabbi Abby Stein about her life journey, and Howard Rosenman, who told his story as an Oscar-winning gay Jewish producer.

Other speakers at the event included Ukrainian TV presenter Boris Burda, Lithuanian writer Rūta Vanagaitė, New York-based Russian fashion designer, Leonid Gurevich, and Grisha Yakubovich, who served in the Israel Defence Forces for 30 years, ending his career as head of the Civil Coordination Department of the Coordinator of Government Activities in the Territories.

“We’re extremely happy to be here for the first time ever in the Columbia University, on the 70th anniversary of Israel, to celebrate with hundreds, despite the helpless BDS efforts to boycott the Jewish state,” said Limmud FSU co-founder Chaim Chesler.

She said: “We have begun to create an enhanced network of young leaders educated in Jewish history, heritage, and culture, who have the connections, skills and tools to shape the future of the Russian-speaking Jewish community in the United States.”