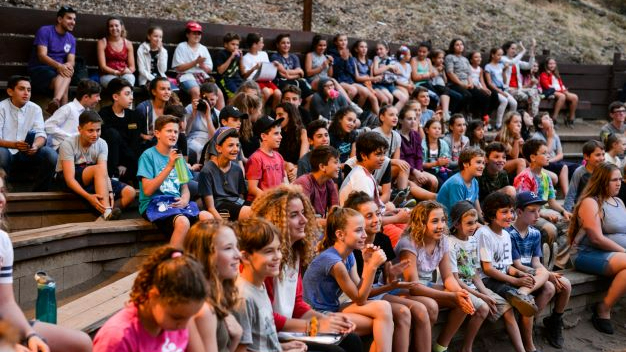 "These kids have been through trauma." Camp Gesher, the only camp in North America for Russian speaking Jews, is welcoming 29 young Ukrainian refugees.

These kids, who have been through so much, will be able to just have fun and play games and enjoy a brief respite.

Yakiv Berin and his family escaped their home in Ukraine following the Russian invasion.

"Inside of my soul, I'm not too great and that's understandable. It's already more than 5 months what's happening in my country, and I don't see the end," said Berin, a counselor at Camp Gesher.

Yakiv Berin and his family escaped their home in Ukraine following the Russian invasion. After a long journey, they made it to the United States to stay with family; but, it hasn't been easy. This week Berin will serve as a counselor at Camp Gesher, the only camp in North America for Russian speaking Jews, located in the Angeles National Forest. Because of the ongoing war, the camp will welcome 29 Ukrainian refugees ages 8-17 including Berin's younger sister.

"I want to make everything to make her happy because she's having not good times right now. She's really worrying about the situation. These 12 days will hopefully help her to get a bit in a different situation. Definitely it will make her mental health better," said Berin.

"These kids have been through trauma; experienced things that are unthinkable. For them to get to the U.S. that was traumatic, and now they're here away from their homes," said Rabbi Bill Kaplan, the executive director of the Shalom Institute.

The camp, operated by the Shalom Institute, will host the Ukrainian refugees for free, thanks to donations from the United Jewish Federation of Greater Los Angeles and the Genesis Philanthropy Group. For 12 days, these kids who have been through so much, will be able to just have fun.

"To get away from the tragedy. to get away from the war, get away from violence and to give their parents their mothers a week or so of rest. They know their child will be fed, housed, taken care of mentally, spiritually, given an opportunity to laugh, sing, and do arts and crafts together," said Rabbi Noah Farkas, the CEO and president of the Jewish Federation of Greater Los Angeles.

This is not the first year for the camp, but the first time they'll host Ukrainian refugees. If you'd like to learn more, you can visit www.campgesher.org.