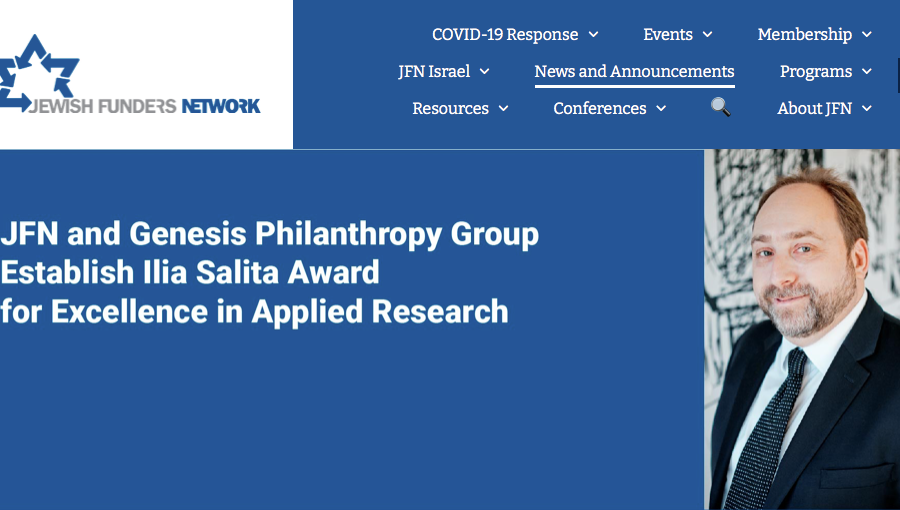 uniquely valuable research projects that can impact Jewish life in a direct and positive way.

The establishment of the Ilia Salita Excellence in Research Award, funded by Genesis Philanthropy Group (GPG), was announced at the Jewish Funders Network (JFN) 2021 International Conference on Wednesday, March 17. The award celebrates the life and legacy of Ilia Salita z”l, GPG’s former president and CEO, who was a deeply respected and beloved figure in the Jewish philanthropic world.

The announcement was made during the plenary session of this week’s conference, by GPG CEO Marina Yudborovsky, JFN President and CEO Andrés Spokoiny and Josh Salita, Ilia’s eldest son. The award is inspired by Salita’s passion for informed, data-driven philanthropy and his promotion of innovative applied research techniques.

The award will focus on recognizing and highlighting research projects that have the potential to impact Jewish communal life in a direct and positive way. Nominated projects must (1.) be related to concrete issues affecting Jewish Communities; (2.) be directly applicable to the work of funders and nonprofits in the Jewish community; (3.) be accessible to lay leaders, professionals and clergy who are not researchers; (4.) display creativity in their subject and/or approach; and (5.) follow all applicable scientific or professional standards.

“I know Ilia would be proud to have a hand in continuing to help the Jewish community make decisions armed with more information and to help reward, as well as incentivize, the work of researchers in this space,” said Marina Yudborovsky, CEO of Genesis Philanthropy Group.

“Ilia Salita, who was a beloved friend and supporter of JFN, married the rigor of the engineer to the passion of the activist,” said Andrés Spokoiny, president and CEO of Jewish Funders Network. “This award, which we established in his honor, will aid Jewish philanthropy worldwide to move ever closer to his ideal—strategic and kind, mentschy and collaborative.”

“My dad put great emphasis on being armed with information and using that information to make the best and the most appropriate decisions, to drive impact and to do so in a way that would most positively benefit the greatest number of people,” said Joshua Salita, Ilia’s son. “I know he would be proud and humbled that two organizations so close to his heart are working together to launch this award in the field of philanthropy, based not just on altruism, but on facts and on evidence.”

Nominations for the award can be made by institutions, researchers themselves, or by third parties. JFN will administer the process, and the winner will be chosen by a selection committee that will include representatives of Salita’s family, GPG, the research community, funders, and distinguished nonprofit professionals. The first call for nominations will be issued during the summer, with the winning research to be presented at the next JFN International Conference and published on a dedicated website, promoted by JFN to funders, Jewish media, and partners around the world.

Ilia Salita was president and CEO of Genesis Philanthropy Group for six years prior to his death in June of 2020. After graduating from Moscow State University, he started his career in academia before moving into philanthropy. At GPG, he led a significant and highly regarded expansion of the foundation’s work, and his leadership touched the lives of countless people across three continents. He is survived by his wife, Irina, his two sons, Joshua and Robert, and his father, Mikhail.