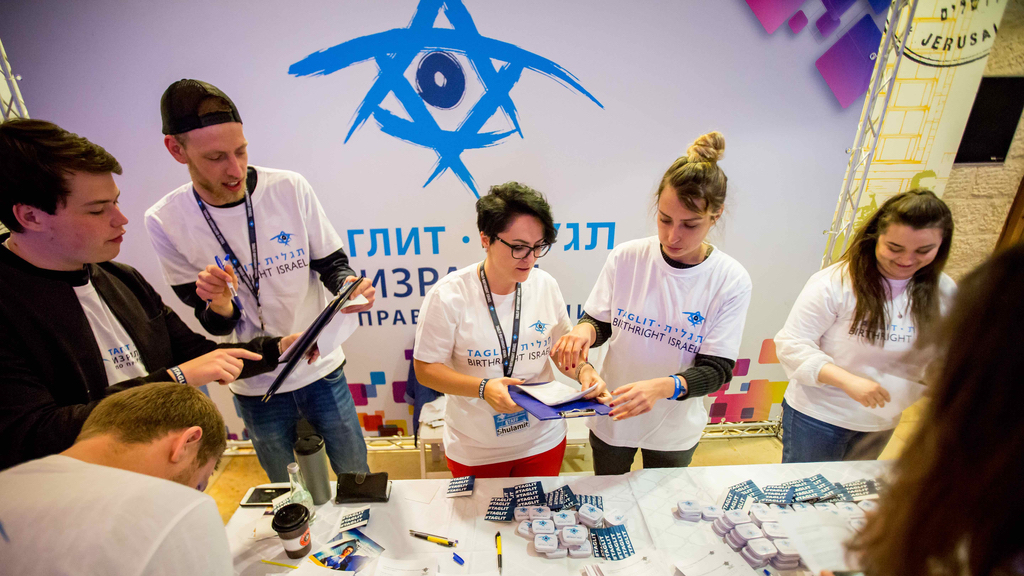 New data from researchers at Brandeis University show that participants in the Birthright program that provides young adults free trips to Israel continue even up to two decades later...

to be more likely to marry other Jews, raise their children Jewish and have a strong attachment to Israel than their peers.

The study, which compares people who went on the trips to those who applied to Birthright but were not accepted, is part of one of the longest-running studies of American Jews. The researchers say it suggests that the experience of the famously free 10-day Birthright sojourns to the Jewish state can have long-lasting effects into adult life.

“As a piece of social science, that’s an extraordinary outcome,” said Leonard Saxe, the director of the Cohen Center for Modern Jewish Studies at Brandeis, and the leader of the study.Yet the study, like Birthright itself, is controversial, for both what it measures and how it measures it.

Critics say that by focusing on marriages between Jews, the research stigmatizes multi-faith families, and that it sidesteps questions about of why American Jews rely so heavily on a travel experience in Israel to shore up their sense of Jewish identity.

“You’re not asking about the foundational assumptions of this diaspora,” said Lila Corwin Berman, director of the Feinstein Center for American Jewish History at Temple University, “the idea that American Jews need to have a quick surge of this authentic Jewish experience, and then everything else will follow.”

Since the coronavirus pandemic broke out in March, Birthright has been on pause, having cancelled trips for 500 people that month and staying shuttered since. A Birthright spokesperson said that the trips “will resume as soon as it is possible and safe to travel.”

While some leaders have expressed concern about the repercussions of perhaps thousands of young adults not having the Birthright experience this year, Saxe predicted that there would be a boon in applicants once the trips resume.

Here’s a rundown of the Birthright data and some of the ongoing questions around it:

How does the study work?

This study, known as the Jewish Futures Project, uses survey data collected from people who applied to Birthright between 2001 and 2009, and compares people who were selected for the program to those who were not. (During those years, before a major investment by the casino magnate Sheldon Adelson starting in 2007 and aimed at making Birthright available to anyone who wanted to participate, only a portion of applicants were accepted.)

In earlier reports, the researchers revealed that Birthright participants are more likely to marry Jews, display an attachment to Israel and participate in Jewish activities at home after their experience when compared to people who applied to go but didn’t get selected. In the period studied, the program was open to Jewish adults aged 18 to 26.

The researchers’ focus on marriage was always questioned by some, but became more controversial after sexual harassment allegations against Michael Steinhardt, a billionaire philanthropist who provided part of Birthright’s initial seed funding, and Steven Cohen, a Jewish population researcher who often made hay of Birthright’s apparent effect of leading participants to choose Jewish spouses. Steinhardt repeatedly harassed women in his decades of philanthropic largesse, frequently commenting on women’s supposed reproductive abilities or choices. Cohen, who was accused of sexual harassment by several women, focused his research on highlighting intermarriage and Jewish population size.

What’s new in this report?

This study, which used survey data from 2,477 respondents taken over the last six months of 2019, shows that 55% of Birthright participants chose Jewish spouses, compared with 39% of applicant nonparticipants. (The study only looks at initial spouses, and not any potential subsequent partnerships or marriages.)

It’s notable that the effects of going on Birthright seem to last long term. In its infancy, when the program was first seeded by Steinhardt and the billionaire philanthropist Charles Bronfman, it was derided as “Steinhardt’s stupidity” and “Bronfman’s blunder” for being touted as a silver bullet against rising secularism and intermarriage.

But experts say that the Brandeis research suggests that the trips have had genuine long-term effects.

“You’re looking at a single intervention, at a single point in time,” said Shaul Kelner, an associate professor of sociology and Jewish studies at Vanderbilt University, and the author of “Tours That Bind: Diaspora, Pilgrimage, and Israeli Birthright Tourism.” “To see that there are effects that you’re able to see 10, 20 years later, that’s really surprising.”

Why is Jewish-Jewish marriage so important in this study?

Saxe said that marriage is a useful sociological indicator of attachment to Jewish identity, and thus a good measure of the effectiveness of Birthright, which is aimed at strengthening that identity.

“It doesn’t surprise me that for people who go on Birthright and come back feeling that being Jewish is neat, being part of something larger than myself is neat, sometimes the easiest way to do it is find somebody who shares that view,” he said.

The study — and the program — has been criticized for this focus, especially given reports about how Steinhardt made women uncomfortable by focusing on their reproductive capacity.

The study’s authors break down those surveyed into groups of those who partnered with Jews and those who did not. That allows them to separately assess both whether and how the program affects marriage choices, and what effect the trips have regardless of whether participants marry Jews.

This is important because just about every study of American Jews shows that those with Jewish partners participate more fully in organized Jewish life, such as religious observance, synagogue membership and Jewish education.

Though the survey asked whether respondents send their children to Jewish summer camp or have them enrolled in formal Jewish education — and showed no discernible difference between those who went on the trip and those who did not — Saxe said he does not yet think there are enough school-age children in the cohort to make those questions meaningful.

Regardless of who they marry, Birthright participants continue to report stronger connections to Israel than those who did not go on the trips. Both those with Jewish and non-Jewish spouses reported that they feel connected to Israel, talk about Israel and seek out news about Israel. A third of those surveyed have returned to visit the country since their Birthright trips.

But the study concludes that “Birthright’s impact on community involvement and social engagement is small in magnitude.” Participants with both non-Jewish and Jewish spouses were only slightly more likely (61%) to have attended events sponsored by their local Jewish community at least “occasionally” during the previous year than those who applied to the program but were not accepted (51%).

“The program does nothing to promote Jewish engagement after the trip. It doesn’t give them memberships in Aipac or Hadassah or in their local synagogue,” he said. “The program spends 10 days connecting them to Israel — that’s where I would expect to see the effect.”

So does this study mean that intermarriage leads people away from Judaism?

No. In fact, Saxe said, it demonstrably shows that interfaith families can raise Jewishly engaged children. There are important findings in this new batch of data that complicate the idea that people need a Jewish partner, or two Jewish parents, in order to engage in Jewish life.

He noted that Birthright has a similar effect on whether participants choose a Jewish partner regardless of whether those participants themselves have two Jewish parents or one.

The new data also revises a finding from 2017 that suggested that Birthright made participants, particularly men, who partnered with a non-Jew more likely to raise their children Jewish.

In fact, the study’s authors say, among Birthright applicants with partners who aren’t Jewish, there was no difference between participants and nonparticipants as to whether they said they were raising their oldest child Jewish.

Saxe said that Birthright itself, while founded during an era of panic over intermarriage, is pluralistic by not assuming a strong religious upbringing of its participants.

“One thing Birthright does, is it treats people the same, regardless of their background,” he said.

More than 100 people protested outside Birthright Israel’s New York headquarters as part of an event organized by Jewish Voice for Peace in December 2017.

What is missing from the study?

The study does not ask participants’ politics on Israel or anything else. In recent years, Birthright has been the object of protests for not including visits to Palestinians areas in its itinerary, with some participants even walking off their tours.

“In order to increase the connection of interfaith couples to Jewish life, you need to stop telling them that their marriage and their family are suboptimal,” Bromberg said. “By setting up success as marrying a Jewish spouse, you perpetuate the negativity around that.”

Berman compared the Birthright study to Jewish population studies from the 1990s, which divided the community into a “core” and a “periphery,” and led Jewish organizations to focus their investments on engaging the core under the assumption that the periphery was too difficult to reach.

“The premise here is not really comparing Birthright with alternatives, it’s creating categories of participants and nonparticipants,” she said. What’s lost, she said, is discussion about whether Birthright itself is the ideal model for engaging Jews when compared with other programs that may not have extensive survey data.

But Saxe maintains that Birthright is a model for pluralism, since it takes a wide view of Jewish engagement and casts a wide net for Jewish participants, allowing many people to deeply engage with their Jewish identity for the first time.

“People not only hear about Jewish things,” he said, “but they develop a feeling, an attachment, to the land and to other Jews. We sometimes downplay how important it is to enact our attitudes, not just say them, or think them.”