Not Jewish enough? A teen trip to Germany changed my mind 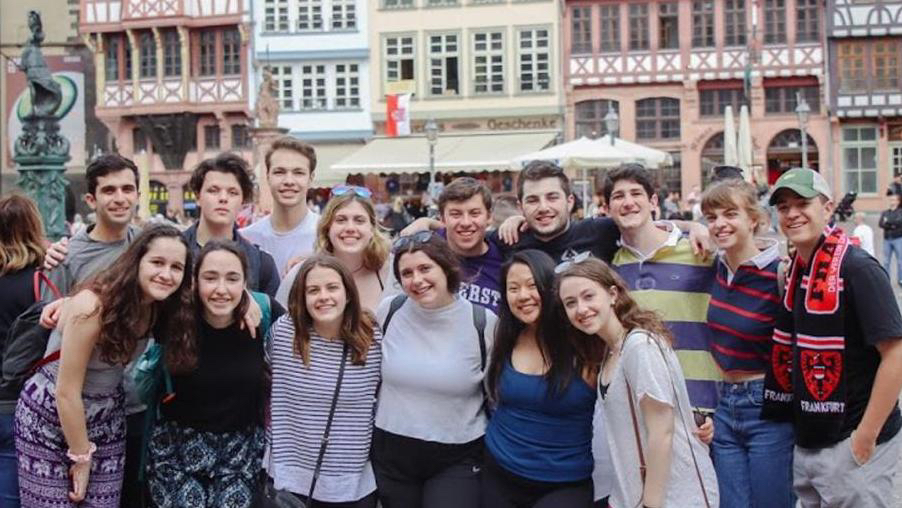 My Jewish experience is very different from those of my friends.

My parents emigrated from Moscow to Tel Aviv to San Francisco. They were raised in circumstances where they had no choice but to be secular. Where they were from, they were shamed for practicing Judaism. This was the world they grew up in. They never learned much about what it meant to be Jewish.

The story is the same for other children of immigrants from the former Soviet Union.

I don’t keep kosher. I don’t celebrate Shabbat each Friday night with my family. I barely manage to celebrate the most important Jewish holidays. The last time I was in a synagogue for a proper and formal service was for a bat mitzvah. Oh yeah, I never had my bat mitzvah.

To be fair, not many of my close friends keep kosher or go to services each week or celebrate Shabbat. But still, they make sure to practice the High Holidays. Many know Hebrew, and some have attended a Jewish school, where part of their curriculum involves learning about Judaism and building their identity. I’ve never known much of a Jewish identity my entire life.

I sometimes feel embarrassed about this. I know that I am Jewish, but society has made me feel like I wasn’t Jewish enough.

Whatever sense of Jewish identity I had, I certainly have taken it for granted.

Last spring, I applied to a BBYO Passport program called Ambassadors to Germany — a special travel experience that allows participants to connect with the community and learn about Germany’s rich Jewish history. I applied on a whim and really wasn’t sure what I was getting myself into.

Though I previously had attended a BBYO International Convention, I had never gone on an international program with BBYO, and I knew no one else who was applying. I didn’t even really know how it worked, but I thought, “Why not give it a shot?” It was the first of many risks for me that ended up being well worth the reward.

First we spent several days sightseeing in Frankfurt and Berlin, building context for the history of Jewish life in Germany. For the first time, I was able to understand and visualize the tangible weight of what the number 6 million really means. I was able to picture the richness and the pride of Jewish people before the world completely changed for them, and for us.

I had been taught this part of German history, the Holocaust, for many years. It becomes very easy to get absorbed in the past and project it onto our present. I would have never believed I would come to Germany and be welcomed by a Jewish community that was thriving and proud.

The final leg of our journey was at a ZWST leadership seminar in the town of Bad Sobernheim.

ZWST is the Central Welfare Board of Jews in Germany, and BBYO’s youth movement partner.

The ZWST teens could not have been warmer and more hospitable. They were so excited to hear about our travels, and many of them were children of immigrants from the Soviet Union — just like me. I didn’t think that this seminar would change my perspective on my Jewish identity, but speaking with those teens did just that.

At lunch, I overheard a girl named Sophie talking about her Jewishness. “My parents did not grow up being ’Jewish,’” she said. “ZWST is the only reason I have a Jewish identity at all.”

I immediately jumped into the conversation, incredibly excited that someone else felt the same way about their Judaism. I told her about my experience growing up with parents who never got to experience a vibrant Jewish community, and though I completely understood why it was that way, it made me afraid that a big part of our history was being lost. Other girls at the table jumped in, saying that the organization they are a part of is what allows them to grow the future Jewish community. I feel similarly about BBYO. If it wasn’t for BBYO, I don’t think I would have known anything about this core part of myself.

Later that night, during services, cultural barriers between our groups suddenly disappeared. A sore throat kept me from fully participating in prayer. Instead, I was able to sit back and listen to the group welcome Shabbat. At that moment, I realized the significance of what we were doing. We spent a week learning about Judaism in Germany. After the Holocaust, no one believed there would ever be a Jewish community there again. But there we were, praying together, in a country that once believed that Jews should be extinct.

I left the seminar with an immense feeling of pride for the global Jewish community. I understand now that no matter our backgrounds, we all have a place within it.

Be proud of your Jewish identity. It is proof of the strength and the spirit of our community. It demonstrates that we are more alike than we are different. That to me is a beautiful and hopeful message for the future. For our future.

By Emily Leyfer, an incoming freshman at the University of Oregon. She was active in BBYO in the South Bay, and has worked with Jewish Family and Children’s Services in Palo Alto.