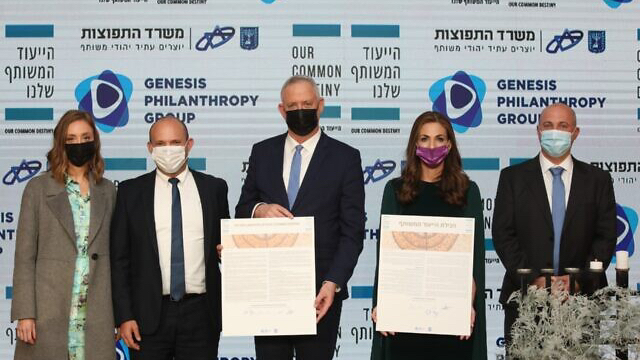 'Declaration of Our Common Destiny' seeks to 'prioritise common ground', warning of 'alienation and indifference' between Jews in and outside Israel.

Jewish leaders have pledged to do more to promote “global Jewish unity” in a declaration intended to halt the drift between Israeli and Diaspora Jews.

Those organising the Declaration of Our Common Destiny, signed by Israel’s current and next prime minister in Jerusalem this week, said it seeks to “prioritise common ground”, warning of “alienation and indifference” between Jews in and outside Israel.

The venture, which has had the input of tens of thousands of Jews around the world, was initiated by the Genesis Philanthropy Group (GPG), whose founder warned that the “only true cure is our common will and mutual effort to turn the tide”.

First presented to Israeli President Reuven Rivlin in September, the document says that while the Jewish people now have “the privilege and responsibility of national sovereignty, security, economic and scientific growth, at the same time, we are also experiencing the challenges of shifting Jewish identities and diminishing affiliation”.

It adds: “The time has come to rise above internal disputes and move beyond a sense of shared fate, a Covenant of Fate, beyond a past in which we had less self-determination, toward a covenant of a shared future, a Covenant of Destiny.”

Israeli Prime Minister Benjamin Netanyahu holds a copy of the Declaration of Our Common Destiny, which he signed today (14 December 2020), joining thousands of Jews worldwide who have also signed the global Jewish unity document and roadmap for the Jewish future.
The declaration was signed by Israeli Prime Minister Benjamin Netanyahu and Defence Minister Benny Gantz who is scheduled to take over next year. The signing was attended by Jerusalem Mayor Moshe Leon, Israel’s Minister of Diaspora Affairs Omer Yankelevich, and her predecessor Naftali Bennett.

GPG co-founder Mikhail Fridman said: “There is no miracle drug or clever vaccine for the pandemic of alienation and indifference between Jews in Israel and the Diaspora, between Jewish communities, movements, denominations, generations.

Genesis Philanthropy Group Co-Founder and Trustee Mikhail Fridman (shown speaking) was among those who participated in today’s event and signed the Declaration of Our Common Destiny, joining thousands of Jews worldwide who have also signed the global Jewish unity document and roadmap for the Jewish future.

“The only true cure is our common will, our mutual effort to turn the tide and to come together, to prioritise common ground and joint action, and to actively seek and build our future as a united people for the sake of generations to come.”

Netanyahu described it as “an important day,” saying the Jewish people had “in recent generations jumped from the killing fields to the heights of revival”.

Bennett said: “We care about one another, but it’s not enough. We now are on the verge of our next step: furthering and strengthening our common destiny. The centerpiece of Judaism is meaning. It’s all about why. What is the meaning of a Jewish state? Is it just a shelter? No. It’s about being a light unto the nations.”