Russian-Jewish Identity Crisis: Something To Laugh At 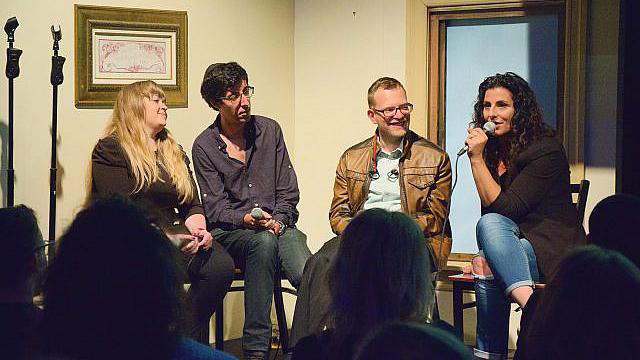 At the Nuyorican Poets Cafe in the East Village on Monday night, the jokes would have been tragic if they weren’t so funny.

“Do you think it ever goes away, the trauma of immigration?” a panelist asked Russian-Jewish comedian Kira Soltanovich.

“No!” Soltanovich exclaimed. “I was 2 when we got here, and I’m still traumatized from immigration. … I’m traumatized by being raised by Soviets.”

In almost any other context, a therapist would be nearby to work through deep-seated issues. Instead, during the deep dive into their background, almost 30 young Russian-speaking Jews laughed — a lot.

“People were collectively celebrating life, which is kind of a rare experience for Russian-speaking Jews,” said Margarita Korol, the Joint Distribution Committee Entwine RSJ project coordinator, after the event. “I remember my grandma being like, ‘life is about suffering,’ and it took me some time to realize not to repeat that and realize that life is about getting through the suffering.”

The panel/comedy night with Soltanovich was part of a multi-city tour sponsored by the JDC and the Genesis Philanthropy Group, which is also hosting an October Ukraine trip for Russian-speaking Jewish young professionals on JDC’s Entwine program. Korol, along with two participants of previous trips, joined Soltanovich on the panel.

Entwine offers heritage and volunteer trips to Jewish communities around the world. The October trip, titled “Not Your Babushka’s [grandmother’s] Ukraine,” highlights the revitalization of Jewish life in the former Soviet Union, which is often a surprise to young American RSJs who grew up hearing about Jewish oppression in the Soviet Union from their immigrant families.

“We’re not from what is now Russia, because there was a completely different place,” Soltanovich said in one of many monologues on the panel. Soltanovich immigrated from Lviv, Ukraine, to the U.S. in the mid 1970s. “I want people to know my parents were raised under a Communist regime. … I feel it’s important to say.”

“‘Russia,’ yeah, yeah,” she quipped. “Russia-n, I speak Russian, I eat Russian food, but I consider myself a Soviet Jew.”

And though Soltanovich speaks mostly English, her background still comes out in force, especially now that she has kids. “I’ll see them do something and [yell] ‘OSTAROJNA!’ [be careful!], and I’m like ‘oh, my God, down, Olga, nyet, nyet Olga.’” (Olga is how Soltanovich refers to her inner RSJ personality.)

Underlying the comedy was the unspoken need for the younger generation to engage with the RSJ experience. Many immigrant families tried to shield their children from the difficult stories of the Soviet Union, which left young RSJs a little more lost in their adulthood.

“A lot of us Russian-speaking Jews feel confused,” Korol said, “especially about the identity. That also includes, like, how Jewish am I going to live my life, and what do I even have to pull from here. There’s peer pressure because we’re just in America being assimilated. And yet I personally feel empty, a little bit, from that. So by being able to explore this past that’s ours, we can reclaim the future.”
Because of that, Korol said, the night with Soltanovich (in all its tragic/comic glory) and the JDC Entwine Ukraine trip address a common need with young RSJs: to learn about themselves.

“What do they say? A life unexamined is not worth living? This feels like in that vein,” she said.