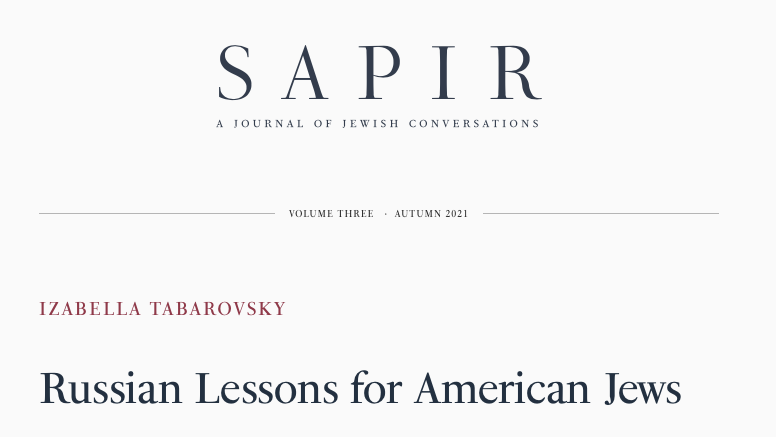 I first learned that being Jewish had something to do with religion when I was 20 years old and a new immigrant in America.

It took me nearly two decades to fully understand that conversation and to find my own path to Judaism. It was a hard journey. The first obstacle was my “religion is the opium of the people” conditioning. I squirmed at services, wondering whether the intelligent-looking people in the sanctuary took all that God-talk seriously. Lack of basic Jewish literacy, which left me feeling dumb and lost at Jewish events, was another. And then there was the failure to connect with my American-born Jewish peers. Their Jewish experiences were about Jewish summer camps and bar mitzvahs. Mine were about getting nearly run over by a Jew-hating truck driver and figuring out which university might accept me as a Jew.

At some point I quit trying. I exchanged alienating synagogue experiences for meditation halls and yoga retreats. Instead of Hebrew psalms, I chanted Sanskrit mantras. Instead of the Torah, I studied the Buddha’s path to enlightenment. I was a member of no Jewish community. And yet not once in those years did I doubt my Jewishness. Judaism might have felt foreign, but I knew exactly who I was: a Jew. If someone had asked me in those years what made me feel so certain, I might not have understood the question. My entire life had been defined by my Jewishness. What else could I possibly be?

My frustrating attempts to reconcile my Jewishness with that of my American peers will sound familiar to many in my generation of Soviet Jewish immigrants. We weren’t the only ones feeling frustrated. American Jews did, too — by our apparent apathy and failure to engage. As the years wore on, many assumed that we had simply assimilated. And yet, 30 years after this immigration wave first began in America, Russian-speaking Jews, or RSJs, are still here, still identifying themselves as Jews, suggesting that some form of continuity is in place. What is it? What has sustained it? And can it benefit the broader American Jewish community?

If any Jewish group has a right to apply the “my existence is resistance” motto to itself today, it is RSJs. Soviet Jews outlasted Lenin’s, Hitler’s, and Stalin’s “solutions” to “the Jewish problem.” They survived mass slaughter (over 100,000 in the postrevolutionary violence; 2.7 million in the Holocaust), a decimation of their religious and cultural institutions, the murder of their intelligentsia, and an erasure of their collective memory. They came out of those experiences with a Jewish identity that was deeply paradoxical: secular, devoid of any ethnic content — and yet, unshakable.

Some of the “credit” for the construction of this identity goes to the Soviet state, which separated Jewishness from Judaism and defined it as nationality or ethnicity. In theory, this meant that Jews were ethnically Jewish in the same way that, say, Ukrainians were Ukrainian: an ethnic group defining itself by language, history, dress, customs and cuisine. This worked in the first decade of Soviet power, but, as historian Zvi Gitelman describes in detail, by the time the anti-cosmopolitan campaign concluded in the 1950s, Soviet Jews had lost their Jewish particularity. Growing up in the 1970s Soviet Union, I learned songs, dances, national costumes, and traditions of Moldovans, Georgians, Armenians, Uzbeks, Tajiks, Roma, and, of course, Russians. But the idea that Jews might have equivalent ethnic attributes likely never even occurred to me. By then, nothing remained of Jewish culture in public consciousness but ugly stereotypes.

Soviet Jews themselves struggled with the many paradoxes of their identity. A highly-regarded samizdatjournal had a rubric titled “Who Am I?,” in which Jews mulled the question. Fully acculturated, raised on Pushkin and Tolstoy, they felt as Russian as their ethnically Russian friends and colleagues. And yet, the scarlet letter of the Jewish “nationality” line in their identity papers, as well as their recognizably “Jewish faces,” permanently marked them for hate and discrimination, preventing them from assimilating. Many Soviet Jews’ experience suggested that Jewishness was akin to race: a vague yet inescapable reality whose primary marker was one’s external physical characteristics.

For the first time in decades—possibly ever—the American Jewish community includes RSJs who explicitly say that they want to lead on the basis of their particular identity, and not only within their own communities.

Even so, Soviet Jews did develop a distinct culture. For one thing, they came to view themselves as part of the intelligentsia. They understood themselves as people who collected books, read voraciously, and strove for educational and professional excellence. They were people whose children played musical instruments and spent Sundays in theater matinees. They might not have had much knowledge of Jewish culture or tradition, as historian Yaakov Ro’i has noted, but they felt themselves to be Jewish. They had “an existential feeling of Jewish solidarity” and “common fate,” and Jewish pride emanating from their own and other Jews’ professional and cultural achievements. Being Jewish to them was more of a mentality and a shared interpretation of reality than a set of specific Jewish expressions.

The Jewish identity that this complicated mix of circumstances, policies, and adaptations created did not require any specifically Jewish actions to reinforce itself. It is no wonder, then, that it remained invisible to the American Jewish eye. Writing in 2016, sociologist Steven J. Gold observed that it had been only recently that Jewish scholars and community activists recognized that “while Russian-speaking Jews frequently express their Jewishness in ways at variance from the local Jewish population, they often have a stronger Jewish identity and more extensive Jewish social ties than do American Jews.”

The system that produced this identity is long gone, but some of its aspects linger, including among “generation 1.5” — today’s 30- and 40-somethings who came to America as young children. This group has imbibed both the “thin” Jewish culture of their Soviet parents and the “thicker” Jewish culture of their American-born peers. Identities that resulted from that mix have varied widely. Assimilation, undoubtedly, has had a heavy toll on many. Others, however, wanted to transmit their Jewishness to their children. They recognized that for that to happen, “feeling” Jewish was not going to be enough.

RSJs have no intention of letting themselves and their children fall victim to the same form of antisemitism that turned their parents into refugees.

When they found that no American Jewish institutions could meet these complex needs, they established their own. The language that these organizations use to describe themselves says much about the aspirations of the community they serve. For example, iMishpacha seeks “to strengthen Jewish identity, create a sense of community, and nurture future leaders through service-based learning experiences infused with Jewish values,” and it lists Jewish pride and pro-Israel advocacy among its top values and activities.  The Jewish Parents Academy defines its mission as helping RSJs “take ownership of their multilayered Russian-Jewish-American identity and become active contributors to their communities through leadership, volunteerism and philanthropy.” And Club Z is “cultivating the next generation of proud and proactive Jewish Zionist leaders” and envisions creating “a network of leaders who embrace their Jewish identity, are proud of their Jewish heritage, and address issues of bigotry and antisemitism head-on.”

The language of identity, community, volunteerism, and philanthropy may not strike third- and fourth-generation American Jews as notable, but it marks a radical departure from the RSJs’ parents’ conception of Jewishness. Even more striking is the language of leadership. For the first time in decades — possibly ever — the American Jewish community includes RSJs who explicitly say that they want to lead on the basis of their particular identity, and not only within their own communities. Irina Rakhlis, who co-founded the Jewish Parents Academy, told me that the founders’ vision was “to understand who we are,” with the ultimate goal of enabling RSJs “to sit at the bigger American Jewish communal table as educated citizens and educated community members,” rather than as people who feel that they are “not good enough or don’t know enough to contribute to the conversation about the future of the Jewish people.”

The latter point is crucial. Reconstituting and reframing their specific Jewish history has helped RSJs recognize that they have unique strengths and insights that could benefit the broader American Jewish community, including an unapologetic Zionism and a strong sense of peoplehood. Developing religious consciousness may have been hard for this group, but developing a Zionist identity has not been. These Jews know from their families’ experience how crucial it is for Jews to have a state of their own, and a million of their closest family and friends live in Israel. Wherever there is pro-Israel action today, one is likely to find RSJs among the organizers and participants.

For historical reasons, too, RSJs are motivated to fight antisemitism in all its forms. “In Russia there was no difference between antisemitism and anti-Zionism,” Natan Sharansky told me in a recent interview. Soviet Jews knew that Stalin’s anti-cosmopolitan campaign, the Brezhnev era’s anti-Zionist propaganda, and the neo-fascist, Protocols of the Elders of Zion–type antisemitism that emerged during perestroika all targeted Jews. In contrast to their American-born peers, RSJs today easily recognize Soviet propagandistic tropes in the contemporary Left’s anti-Zionist rhetoric, and they identify the danger these present to the Jews. The equation of Zionism with racism, fascism, Nazism, neo-Nazism, colonialism, and racism dates back to Soviet Cold War propaganda, whose goals had nothing to do with justice for Palestinians and everything to do with Soviet political objectives at home and abroad. RSJs are immune to progressives’ claims that anti-Zionism and antisemitism are not the same, because the state-sponsored antisemitism their families experienced was intimately intertwined with the anti-Zionism and anti-Israelism that dominated Soviet public discourse. They have no intention of letting themselves and their children fall victim to the same form of antisemitism that turned their parents into refugees.

For now, the number of RSJs who are exhibiting this level of engagement is relatively small. But they have accomplished something remarkable. Going against the general American trend over the past decade, they have “thickened” their Jewish identity, reimagined their narrative, and become committed stakeholders in their own future and the future of American Jewry as a whole.

Whether their American-born children will continue what they started is as yet unknown. But the very existence of active RSJs in the current American Jewish moment is important. They remember what it is like to be oppressed as Jews. Their experiences endow them with authentic voices and arguments with which to address some of the most crucial issues facing American Jewry today. They bring new immigrants’ wisdom and courage to the community. Significantly, they are no longer on the outside looking in.

Can they make a difference? To a considerable degree, that will depend on the willingness of Jewish communal leaders to integrate their perspectives and to bring them into positions of broader influence. Filling in the gaps in American Jewish education is also important.

Here are some of the things that can and should be done:

Those who feel skeptical about the American Jewish future would do well to remember that not so long ago, a few hundred refuseniks reimagined their Jewish identities and changed the future of millions of Soviet Jews. Could today’s RSJs — their heirs — do the same for American Jewry today?