The Jews of Siberia 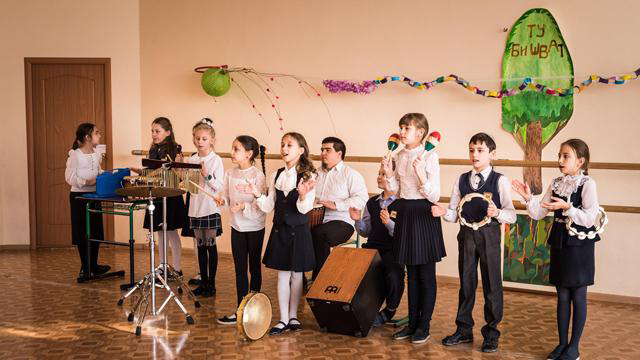 Siberia is a place that brings many images to the imagination: frozen tundra, Soviet-era architecture, a land to be exiled to, and did I mention frozen tundra? But not necessarily Jews.

There are, in fact, 30,000 Jews living in Siberia today, among a larger population of about 36 million. And I had the honor of visiting with them on a mission to Siberia and the Russian Far East through the American Jewish Joint Distribution Committee (JDC), our international partner, and Jewish leaders Cheryl Fishbein, Phil Schatten, Susan Fromm, and Michael Fromm.

On this once-in-a-lifetime journey, we saw first-hand the need of the Jews in the furthest areas of the former Soviet Union (FSU) and learned how we in Greater MetroWest, through our support of JDC, are helping save Jewish lives and build Jewish life. As a JDC Board member, I know this work well, but seeing it in person always brings home the power of our life-changing efforts.

In Novosibirsk, the unofficial capital of Siberia, we were hosted by a community that is home to the majority of the Jews in the region. Though 3,360 kilometers east of Moscow with an average January temperature of -1° F, the community is home to a beautiful synagogue and vibrant Jewish life. It was here that we spent a celebratory Shabbat; visited a poor, elderly JDC client emblematic of the care we provide to the neediest; and spent time with teens participating in JDC’s Active Jewish Teens (AJT) program, a fast-growing Jewish youth program.

For nearly three decades, JDC has been operating in the FSU to support the most impoverished Jews and to help revive local Jewish communities. They currently budget $130 million to achieve these goals. Of this, $120.7 million goes to provide services for seniors, including food and medicine, emergency financial assistance, and socialization.

As much of this funding comes from the Claims Conference, 80 percent goes to services for Holocaust survivors. That means that support for the other elderly JDC serves, and the work of sustaining Jewish life, comes from partners like our Federation, the wider Federation system, and groups like the International Fellowship of Christians and Jews, among others.

In order to get the most out of the monies we provide – and so much more is needed given the critical needs on the ground – JDC has adjusted its business model in the FSU to ensure it is reaching the most people effectively. In some places, this means new approaches to providing care, like call centers and expanding the use of bank cards for poor seniors who need it to purchase life-saving food and medicine.

Additionally, JDC is building on its years of work fostering community life – most especially among young people and volunteers – to empower local communities to take on some of the responsibilities themselves. Flagship programs like AJT and JDC volunteer centers provide an enthusiastic cohort of Jews willing to help their fellow community members in need and promote Jewish life.

AJT provides Jewish teenagers with an opportunity to participate in a vibrant peer network of more than 3,000 teens throughout the FSU. The teens take part in cultural activities, Shabbat and holiday celebrations, and ultimately lead their own Jewish programming in their communities. AJT, a partnership with BBYO and the Genesis Philanthropy Group, will be the source of local adult Jewish leaders in the FSU for years to come.

I saw the need for this type of leadership and volunteer cultivation when we journeyed to the city of Petropavlovsk on the Kamchatka Peninsula, located in an active volcanic region on the northern coast of the Pacific Ocean. There are today about 200 Jews there. Sadly, their small community has declined in recent years leaving it without a synagogue, any communal institutions, or Jewish professionals aside from the JDC coordinator that makes sure that those who have needs get their needs met.

JDC is doing all it can to help, chief among them providing financial support to poor elderly. And yet, local Jews also want to be able to hold on, and build on, to the Jewish identity and traditions they have embraced since the fall of the Soviet Union with our help.

As a photographer, I was snapping photos the entire time to capture this community in transition. As a Jewish communal leader, I was struck by the desire of Jews in the far reaches of the FSU to be able to practice and celebrate their Jewish heritage. But as a philanthropist, it’s painfully clear to me that while we are keeping many of these people alive – statistics show that JDC aid recipients live years longer than others their community – we need to do much more to meet our Jewish responsibility of caring for our fellow Jews and strengthening Jewish communities.

We need to step up our game, sharing their stories and educating the Jewish public about these brave FSU Jews. We are all responsible for one another.