‘They tried to erase Babi Yar, but we will remember’ 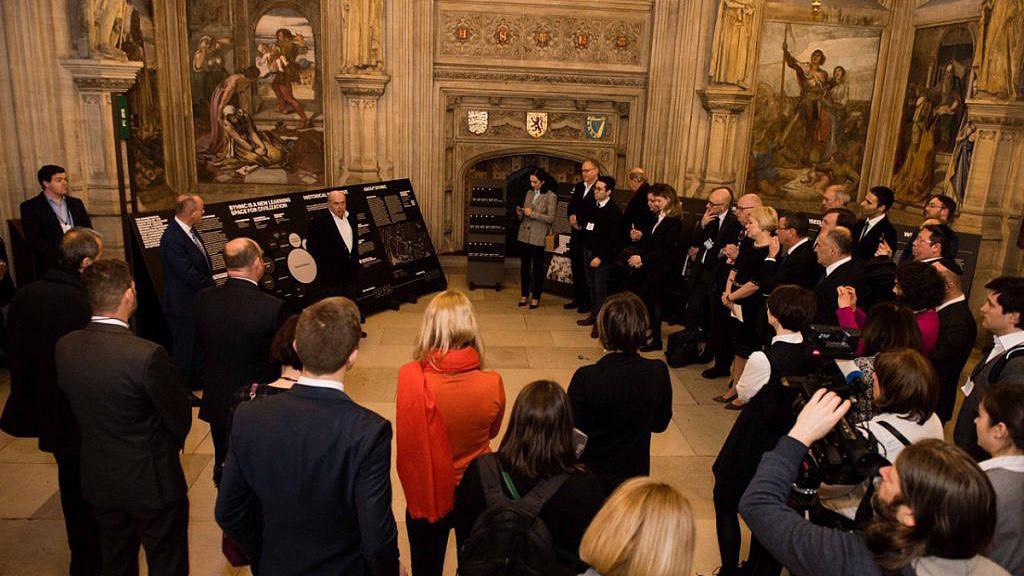 Backers of a planned new Holocaust memorial and learning centre in Kiev, Ukraine, tell Jewish News about their mission to safeguard the truth.

The leading lights of Russian-speaking Jewry have said a new Holocaust memorial and learning centre will be built at Babi Yar in the capital Kiev, and will open 82 years after the Nazis massacred 33,771 Jews there over a single weekend.

It follows an exhibition at the House of Commons on Monday, hosted by MP Mike Freer, in which the project’s backers said 10 architects were currently vying to win the design competition, but warned that some Ukrainian politicians remained wary.

Prisoners, nationalists, communists and Roma were also killed at the site, and authorities have until now committed only to discreet memorials for each group, but those behind the project say a new centre is important, not least because the Soviets tried to “erase the memory of the Holocaust both ideologically and physically”.

Speaking to Jewish News, former Israeli minister and ex-Jewish Agency chief Natan Sharansky said: “They tried everything to raze it from the memory in Soviet times. They even tried to build a stadium on it.”

Born in Ukraine, Sharansky was a well-known human rights activist and refusenik in the Soviet Union, after being denied a visa to Israel in 1973, and spent nine years in prison, often in solitary confinement.

He said he first sought to travel to Babi Yar in the 1970s. “First I tried [to go] for the anniversary [of the massacre] in 1976. I was a dissident activist in Moscow and was invited, but we were arrested on the train. That was my first attempt.”

Sharansky said the site was “always a big symbol, always very emotional, very important for our struggle for remembering”, and recalled reading the famous 1961 poem about Babi Yar by Yevgeny Yevtushenko, written in part to protest the Soviet decision not to recognise it as a Holocaust site.

“I was a young boy,” said the now 71-year old. “Suddenly here was somebody speaking about it openly. It gave such a pride. This was when we had the ‘Khrushchev thaw’. It lasted 24 hours. Then they started a big campaign against Yevtushenko. That was the end of the thaw, the end of a relatively short period of free speech.”

Sharansky finally managed to visit with an Israeli delegation in 1997, a site many Jewish Ukrainians feel so powerfully about, and in 2015 he was asked to become chairman of the Babi Yar Holocaust Memorial Centre, which he accepted.

“We want not only to commemorate, but to collect Holocaust documents, with so many disappearing, and we want it to be an educational centre for schoolchildren to come, like they do for the Holocaust Museum in Washington or Yad Vashem.

“There’s nothing like that in Ukraine, Russia, practically nowhere in Eastern Europe. Hundreds of thousands of people disappeared, and that’s it? Today, people say it can never happen again. Look how easily it happened with educated people.”

He says Kiev’s mayor – former heavyweight boxing champion Vitali Klitschko – is a big supporter, who gifted the land to the foundation during his first days in office, but other politicians are lukewarm.

“There are mixed feelings, because we are going to bring back the truth, including the truth about collaborations,” Sharansky says.

“Recently in the parliament, some said [the new centre] is a Russian provocation, asking why these Russians like [Mikhail] Fridman and [German] Khan are giving money to it.

“I had to remind them that these so-called Russians have six, eight, 10 relatives lying dead there. It’s nothing to do with the [Ukraine-Russia] conflict.”

I ask him whether their fellow Ukrainian Jewish philanthropist, Viktor Pinchuk, whom I saw earlier at the Commons exhibition, had also lost relatives there. As I do, Pinchuk walks past. Sharansky grabs him, and tells me jokingly: “Here, you can ask him!”

I do. “Yes, it’s true for me, too,” he says. “Relatives, friends, neighbours of my parents, all died there, so it’s personal for me, but also it’s a responsibility we have. To prove we’re really European; as Ukrainians, we have to tell the truth.” Then he jokes with Sharansky, saying: “I hope it will still be a big prize to be European!”

Does Pinchuk think the centre will happen – that it will get built? “It’s real. It’s happening. This week [there is an] architecture competition, 10 designs. Can you imagine? It’s not just blah blah blah. We’re here. We donors spent millions of dollars each on this project in the past two and a half years. Believe me, it’s real.”

The exhibition opens at JW3 on 4 February, facilitated by the Genesis Philanthropy Group.