This Victory Day Remember Those Who Risked Most 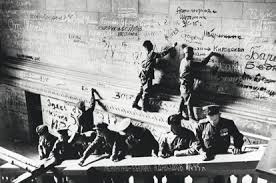 If you were to ask a school class in London, New York, Moscow or Paris about the role played by Jews in the great struggle of World War II...

the paramount battle between good and evil – what would they say?

One would, of course, hope that they would have some knowledge of the incomparable crimes of the Holocaust and the murder of innocent Jews – massacred in the woods, gassed in the camps, starved and worked to death. Others might be able to speak about the less-known, but just as significant reality of Jewish resistance across Europe, such as the extraordinary struggle for survival and dignity in the Warsaw Ghetto.

Yet, with the 74th anniversary of the victory in World War II approaching, I wonder if anyone would mention the contribution and sacrifice of Jewish soldiers and officers of Allied armies who fought to end the tyranny of Nazism? How many are aware of the incredible bravery of Jewish partisans across the forests of Europe? How many would think of Jews as warriors who fought bravely for their countries and for the Jewish people?

We live in a world where voices of hatred and extremism, silenced for so long, are once again heard and are getting louder every day. We live in a world where misinformation is crowding out truth and facts, where ignorance is getting an upper hand in the battle against knowledge, where according to the recently released Claims Conference study, one third of Americans don’t believe that 6 million Jews perished in the Holocaust. We live in a world where all of us must work harder to ensure that the tragedy and the lessons of World War II are indeed never forgotten.

But remembering and honoring the Jewish experience of World War II means being keenly aware of that experience in its totality. Approximately 1.5 million Jewish soldiers and officers served bravely in the Allied armies. They went into battle, carrying the doubled weight of responsibility on their shoulders – the duty to help their country against brutal aggression and the grim knowledge that each day without victory means death and further devastation for the Jewish people. They fought side-by-side with their brothers-in-arms, representing, defending and dying for their countries, for Great Britain, for the United States, for France and for humanity at large. That is what Raymond Zussman of Hamtramck, Michigan and Israel Winberg of Sunderland, Great Britain, did. That is what Jean Tedesco of Paris, France and Lazar Papernik of Slavuta, former USSR did. That is what countless others did.

Out of 500,000 Jews who served in the Soviet Red Army during the war, about 40% perished at the hands of the Nazis. Some marched all the way to Reichstag and left us and future generations with a poignant manifestation of their victory – their names etched in the walls of the most recognized symbol of the defeated Third Reich. Many of those who survived the war remained in Russia and other countries of the former Soviet Union. Some later immigrated to Israel and the United States, to Canada and Australia. Every year, on May 9, the day which is widely celebrated around the world as the day of victory in World War II, those of them who have the energy parade in bemedaled uniforms as living witnesses to the tragedy and the triumph of what is now known as the greatest generation.

We owe all these heroes a debt of gratitude as well as a responsibility of remembrance. In a world where Jews are again accused of showing more loyalty to “their own,” or, in recent times, to “their own” State of Israel, where the centuries-old anti-Semitic canard about Jewish “dual loyalty” finds its way into respectable discourse, remembering – and reminding others – of those sacrifices takes on a new urgency.

Jewish heroes of World War II show those libels for what they are – ignorant and hateful lies, an insult to the history of Jewish soldiers who fought in defense of their countries, the Jewish people and the future of us all. That is why it is so important to ensure that the Jewish contribution to the defeat of fascism is understood – not just in terms of moral outrage inspired by the Holocaust, but also in terms of the bravery of those Jews who were able to take up arms and wage war against totalitarianism on nearly every continent.

Sadly, we are approaching a time when there will no longer be an opportunity to hear the stories of those who fought in World War II from the heroes themselves. That is why the USC Shoah Foundation and Genesis Philanthropy Group partnered, through an award-winning ‘Dimensions in Testimony’ program, to create the first interactive biography of a Jewish hero who fought Nazis with arms in hand. In the words of Genesis’ co-founder Mikhail Fridman, “it is an opportunity to preserve for posterity the voices and stories of those valiant Jewish warriors who did their part to bring about the victory over Nazism.”

As we look toward May 9, we will find no better evidence of the loyalty and valor of Jewish citizens than their willingness to make the ultimate sacrifice for their countries, for the sake of the wider world and, also, for the future generations of Jews.

Raymond Zussman. Israel Winberg. Jean Tedesco. Lazar Papernik. And countless others. Heroes killed in action. May their memory be a blessing.

Ilia Salita is president and CEO of Genesis Philanthropy Group, a foundation supporting projects and institutions that develop and enhance a sense of Jewish identity among Russian-speaking Jews worldwide.