This Yente Found The Perfect Match, Performing 'Fiddler' In Yiddish 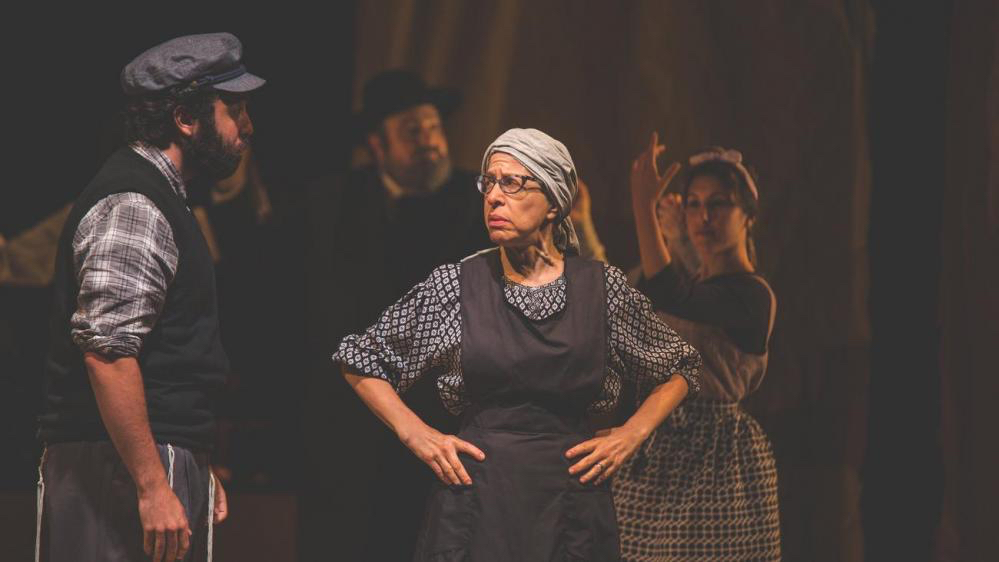 Actor Jackie Hoffman grew up hearing Yiddish, but not really speaking it.

"I spoke what my mother calls kitchen Yiddish," Hoffman says — words here and there that she picked up from conversations between her mother and grandmother.

The language had always been a part of her life, but when she landed the part of Yente the matchmaker in a Yiddish-language version of Fiddler on the Roof, she panicked. "It was intimidating," Hoffman admits.

Fiddler tells the story of Tevye, a Jewish dairyman, who is desperately trying to find good husbands for his five daughters. It takes place in 1905 in a fictional town in czarist Russia. There have been many productions of Fiddler since its Broadway premiere in 1964, but this is the first time the Yiddish-language adaptation has been performed in the U.S.

Hoffman had an ear for the language since she grew up around it, "but it was still surprisingly difficult," she says. "I was like, I thought I had this — I've been hearing this my whole life."

Yiddish was the lingua franca for Eastern European Jews in the 19th century, explains Zalmen Mlotek, artistic director at the National Yiddish Theatre Folksbiene. But the original musical was written in English.

"In the '60s when they wrote it, the feeling towards Yiddish and ethnicity was very different than it is today," Mlotek says. "Today we have a very much stronger desire to know our ethnic background."

The Yiddish Theatre was well-positioned to produce this adaptation of the widely known musical.

"We needed to [produce] it in a different way because people have seen it so many times," Mlotek says. "They've seen big Broadway productions — we couldn't possibly do a big Broadway production. That's why we went to [director] Joel Grey, who envisioned this small, yet intimate, yet deeply moving portrayal of the story."

Audiences follow along with the help of supertitles — and even though it's a familiar story, it's hitting them in an emotional way. "People are so taken by the communication of the story and hearing it in this language," Mlotek says.

There's also something about hearing this story — about persecution, family separation, the death of tradition — in this language, in this country, at this time.

"Who would have thought that anti-Semitism would rear its ugly head in the way that it has?" says Mlotek. "I believe that there's a deep resonance as we tell this story that happened over 100 years ago."