Thousands brave the rain to attend Chanukah In The Square 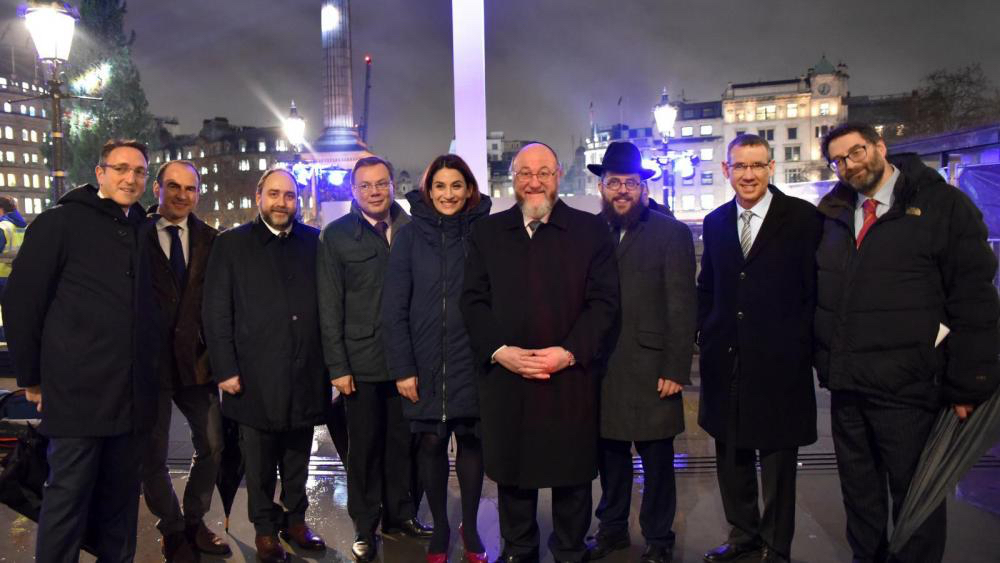 Thousands of Jewish Londoners braved the rain to attend the annual Chanukah celebration and menorah lighting on Wednesday evening.

Chief Rabbi Ephraim Mirvis and Mayor of London Sadiq Khan were among the dignitaries to address the 3,500-strong crowd gathered in Trafalgar Square with both stressing the message of hope and pride contained within the Chanukah story.

Also sending out strong messages on the need for communal unity were Adrian Cohen of the London Jewish Forum and Labour MP Luciana Berger.

The Chief Rabbi said those gathered in the iconic London location should feel “proud through all our ups and downs in history we have remained true to Torah values.”

He said the community should also take pride in being Jewish, British and also feel proud of the state of Israel.

He said: “Standing here in Trafalgar Square we are proud to be to be citizens if the great city of London.”

In his speech at the event - which is put on by the Jewish Leadership Council, the Chabad and other communal groups - the Mayor spoke of the need for “solidarity with our Jewish friends” in the wake of the Pittsburgh synagogue attacks.

He also said:”It is really important that at this time as we celebrate with our families and here in Trafalgar Square that we remember those who lost their lives simply because they were Jewish.”

In her speech Jewish MP Luciana Berger called for the crowd to “take a stand against the evils of our time - misogyny, racism and hate.”

She urged the community to “resist” and take a stand against those who attack the “ Jewish community’s identity and rights.”

Speaking earlier, Adrian Cohen said: “It’s been a bit tough for all Londoners at the moment but we’ve had it tougher and we’ve pulled through. We can do so again.”

Introducing the Mayor, Board President Mrs van der Zyl also delivered a strong message of hope and light in what had been dark times of late.

Israel’s Ambassador to the UK Mark Regev compared London’s tolerant culture to that of the Jewish state.

Revellers were treated to musical entertainment from Israeli band The Solomon Brothers as well as customary doughnuts ahead of the Menorah lighting.

JLC Chairman Jonathan Goldstein said: “Chanukah in the Square is a special event in our communal calendar.

"The JLC is proud to be a part of this public celebration of our community and I was honoured to light the menorah with friends from across the country and all denominations and to shine a light on our faith, history and heritage.”

Mr Khan said: “Chanukah celebrates freedom from religious oppression and is ultimately a story about the triumph of light over darkness.

“I am proud to be Mayor of a city which embraces its diversity - and proud to stand shoulder to shoulder with Jewish Londoners as we light the menorah and reflect on the message of hope Chanukah brings. Chanukah Sameach.”