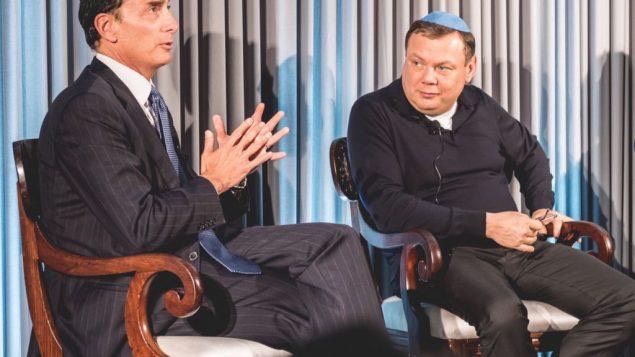 Two prominent Jewish billionaires have delivered a powerful warning about the future of Jewish survival during the inaugural event of Living Torah.

Mikhail Fridman and Matthew Bronfman, chairman of Limmud FSU, spoke to a packed audience at Chabad Belgravia about the relevance of Torah to their lives and careers. Both men agreed that in the modern world tackling the challenge of assimilation was a central priority.

Bronfman, a New Yorker who was not brought up in a traditional Jewish home, spoke movingly of how “ignorance and apathy” often resulted in assimilation. “It is our responsibility to share the beauty, wisdom and truth of Torah. How can we expect the next generation to love the beauty of Judaism if they are not exposed to it? This responsibility starts within our own family and stretches out to all unaffiliated Jews,” he said.

“Jews today are a divided people – we judge, criticise and sometimes even scorn each other,” he added. “There is too much judgement and not enough tolerance in today’s Jewish communal life.”

“We must challenge assimilation, because otherwise in a few generations’ time we will have a small group of religious people which will represent all Jewish communities. Secular communities could disappear altogether or be assimilated.”

Fridman argued that to survive in this “new embracing world” we must utilise soft power by focusing on Jewish philosophy, values and culture. By doing so, the challenge of convincing new generations to remain Jewish could be achieved and Jewish traditions preserved.”