Ukraine, collaboration, diversity and ‘moonshots’: What people talked about at JFN 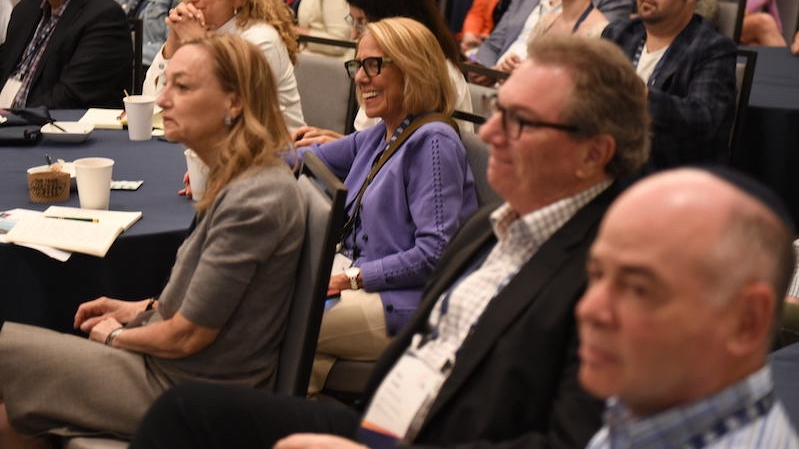 The question of how to pursue big ideas was a running theme.

Everyone at the Jewish Funders Network International Conference, which wrapped up yesterday afternoon in Palm Beach, Fla., appeared to agree on one thing: It was nice to be back in person — to meet at the hotel bar, to have spontaneous brainstorming sessions with colleagues, to see people, as several attendees said, “in three dimensions” — not on Zoom.

Beyond that, attendees told eJewishPhilanthropy that a few trends emerged from the gathering, the organization’s first in-person conference since 2019: Everyone is eager to keep aiding Ukrainian refugees. People said they want to see more collaboration between foundations and grantees — though it’s unclear how many funders will take up JFN’s call for “participatory grant making,” which would let grantees in on funding decisions.

“We cannot be effective, impactful grant makers without listening to the people who are closest to the work,” Lisa Eisen, co-president of the Charles and Lynn Schusterman Family Philanthropies, told eJP. “That doesn’t mean, necessarily, handing over decision-making over the dollars, but ensuring that the resource allocation is deeply informed by what the people on the ground say they need. It can’t be only top-down.”

Attendees mentioned wanting to engage a more diverse set of voices — in a variety of ways. “We’ve become, not nearly good enough, but better at including gender diversity and age diversity and people of color in the community,” said JFN’s CEO, Andrés Spokoiny. “But there are still huge chunks of the community that we don’t even know how to integrate, like the Haredi community,” parts of which may, Spokoiny said, sometimes request gender-segregated spaces, something JFN will not provide.

In the closing plenary on Tuesday, Caryl Sterm, executive director of the Walton Family Foundation, also called for uniting across political divisions. “Let’s stop debating what we don’t agree with, and agree that we want to solve the problems, and make that more important.”

One surprising patch of common ground, Spokoiny said, was climate change, where he said he observed funders from right and left come together — for different reasons. “Some people approach it from climate justice and some people approach it [as a] pure Zionist thing, like climate change is bad for Israel,” he said. “But it doesn’t matter. Ultimately, they both end up doing the same things.”

And attendees talked of the need for more ambitious ideas and greater tolerance for risk — in conference lingo, an embrace of “moonshots.” But the details of what that would entail, or where it might focus, remained vague. The question is whether “the large Jewish organizations welcome really risky experiments,” Eric Goldstein, the CEO of UJA-Federation of New York, told eJP. “Whether they’re prepared to fund failure in the effort to think big and recognize that not everything is going to succeed.”

But Eisen said, “I don’t think we should focus only on moonshots, because there is a lot of innovation happening on the ground, happening from the fringes, happening in the organizations…  I don’t think we have to always be looking for the next Birthright.”

The conference ended with an announcement on Ukraine aid: JFN is partnering with UJA-Federation of New York on an initiative of up to $2.5 million to provide kosher-for-Passover seder food to Jews in Ukraine and neighboring countries. UJA-Federation is allocating half of that amount, to be matched by JFN members.

“We thought we would do something concrete and focused in a timely way,” Goldstein said. The initiative hopes to convey the “embrace… of Jewish community, of connecting people back to comforting ritual and tradition.”

The conference felt like a respite from COVID-19, but Adina Poupko, executive director of the Natan Fund, told eJP that the return of in-person interaction will mean a new set of significant changes for organizations, as opposed to a return to the status quo in 2019, because the organizations have reached new audiences in remote locations through Zoom.

“What organizations were definitely struggling with is, ‘While we were on Zoom, we were engaging people in areas, geographic regions that we never imagined,’” she said. “Now we need to actually do that in person… So you see people thinking more about regional offices, hiring people outside of, let’s say, New York, if that’s where their office is.”

Spokoiny also would have liked more discussion of how Zoom has changed nonprofits and their donors. He also wishes the conference had focused more on mental health. But he’s less worried about more recent challenges the country faces, like inflation. He estimates that, in total, JFN’s 600 member units represent $6 billion in annual philanthropy. And he’s confident that as dollars get less valuable, his members will give more.

“I’m not concerned about inflation in philanthropic terms,” he said. “If things go up, philanthropic contributions go up too. I’m pretty certain that foundations will respond to that.”