Ukraine Jews find cause to celebrate despite country’s challenges 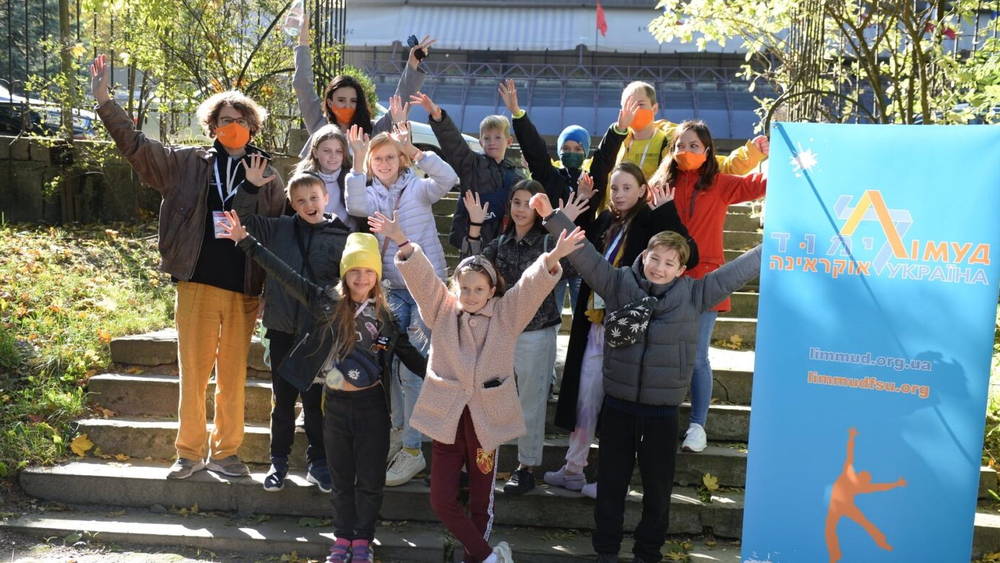 For three days earlier this month, Jews from across the former Soviet republic gathered at this medieval city...

near the Ukraine-Poland border to explore their roots, enjoy traditional Yiddish and Hebrew music, learn about Israel, and reconnect with friends they hadn’t seen since before the coronavirus pandemic. The occasion was Limmud FSU’s first in-person convention in Ukraine since 2019.

Barely 24 hours after the presidents of Israel and Ukraine solemnly inaugurated a memorial complex commemorating the 1941 massacre of 33,000 Jews by Nazis and local collaborators at Babyn Yar, in another area of Ukraine some 350 Jews converged on Lviv for a joyous festival of singing, dancing and celebrating Jewish life.

“The fact that we opened Limmud Ukraine 2021 the day after the Babi Yar ceremony ended was very symbolic — from death to life,” said Chaim Chesler, who founded Limmud FSU in 2005 together with Sandy Cahn as a way of bringing Jewish culture to Russian-speaking Jews. “We focus on the future, but we don’t forget the past. Despite the hardships, they still want to come.”

Those hardships are no secret. Ukraine is Europe’s second-largest country, but its poorest as measured by annual per capita income. Meanwhile, vandals occasionally attack Jewish cemeteries throughout this Texas-sized country, which before the Holocaust was home to 1.5 million Jews.

The Oct. 7-10 event, held under strict health protocols at Lviv’s Hotel Premier Dnister, marked Ukraine’s 14th Limmud since the first conference in Yalta, in 2008. The opening ceremony at the latest event, emceed by Jewish entertainer Julia Savina of Kharkiv, featured video greetings from Limmud FSU representatives in places from Moscow to Montreal, as well as a welcome by Lviv Mayor Andriy Sadovyi.

“It’s fitting that our first post-pandemic, full-fledged conference was in Ukraine,” noted Limmud FSU chairman Matthew Bronfman. “In between lockdowns, our local and devoted team of volunteers managed to mount three small-scale events. We were delighted to return to Ukraine’s historic capital, Lviv, for a fifth time to celebrate our cautious return to ‘normal’ programming.”

Since 2005, Limmud FSU get-togethers, led by Bronfman and the organization’s president, Aaron Frenkel, have attracted an estimated 75,000 Russian-speaking Jews in more than a dozen countries throughout North America and Europe, and as far away as Australia.

Evgeny Shyder, an IT project manager for a Ukrainian outsourcing company, helped organize the event as head of Limmud Ukraine’s technical committee. “Limmud is like my hobby. I’ve been volunteering since 2008,” said Shyder, 40, who also volunteered for Limmud during the three years he lived in the Israeli cities of Ashdod and Petah Tikvah with his wife and two kids. “I like Israel. My parents moved there because of me, but we decided to return to Ukraine because the cost of living in Israel was too high for us, and my Hebrew wasn’t perfect.”

Due to pandemic restrictions, attendance was down since the 2019 event, which attracted 700 participants. But the programs at this month’s event were no less varied and timely. Conducted almost entirely in Russian, its presenters ranged from Igor Schupak, who spoke about Ukraine’s post-Holocaust history, to Galina Ulyana Movchan, who led a workshop on how to do social media marketing in the Jewish world.

Another popular lecture — and the weekend’s only session in English — was a talk by digital marketing executive Ruben Lanzberger on the work of artist Marc Chagall, who was born into a Hasidic Jewish family in present-day Belarus but spent the last 50 years of his life in France.

“Limmud is one of those annual events that brings you back to your Jewish culture,” said Lanzberger, 52, a Parisian of Russian origin who has lectured at previous Limmud events on other notable Jewish cultural figures such as Philip Roth, Woody Allen, Ralph Lauren and Amy Winehouse. “It helps you understand your own culture, even if you’re not religious.”

Mark Dovev is head of the Dnipro office of Nativ, an Israeli government-affiliated agency whose goal is to cultivate Jewish identity among Jews of the former Soviet bloc. An Orthodox Jew who emigrated from Dnipro to Israel at the age of 18, Dovev, 46, gave two lectures during the weekend retreat: one on the place of haredi Jews within modern Israeli society, and the other on the status of women in Judaism. The regional director of Nativ in Ukraine, Felix Gurvich, was also in attendance.

“Limmud is a very important stage for us, and for Israel to connect with young intellectual Jews here,” said Dovev, who also works at the Israeli Embassy in Kyiv.

One of the highlights of this Limmud was Dovev’s impromptu Q&A with Michael Brodsky, Israel’s newly installed ambassador to Ukraine. In an interview following the Q&A, Brodsky said that the relationship between both countries is warm and family-like — especially given that 500,000 Ukrainian Jews have moved to Israel over the years, and that some 50,000 Israeli citizens currently live in Ukraine.

“We want the Jewish community here to remain strong and influential,” said the Russian-born Brodsky, who immigrated to Israel at 18. “We want to promote Israeli interests, and we rely on the Jewish community for very sensitive and important matters such as security. Ukraine has a vote at the United Nations, and it’s very active in the international arena.”

Brodsky, previously Israel’s ambassador to Kazakhstan, said Ukraine now has 150,000 to 200,000 Jews, with the largest communities in Kyiv, Odessa and Dnipro. In contrast, Lviv, which once boasted 45 synagogues, today is home to fewer than 1,000 Jews.

“Limmud conferences require a great deal from their participants: high personal motivation, interest in Jewish knowledge, and a genuine desire to identify with the mosaic of our people,” said Dorit Golender, vice-president for community relations at Genesis Philanthropy Group, one of Limmud FSU’s key backers, along with the Claims Conference, the Jewish National Fund (KKL), the Blavatnik Family Foundation, philanthropists Diane Wohl and Tom Blumberg, and others. “Limmud’s conference in Lviv is an important link to their Jewish heritage and identity.”

That’s why Helen Tsarovska traveled six hours here from Kyiv, where she works for Hesed, a charity that tends to sick and elderly Jews. Tsarovska, a geologist by training, is 66 and old enough to remember the antisemitism she encountered while attending Kyiv University, where she was one of only three Jews out of 125 students in her graduating class.

“The situation now is better than when the Soviet Union existed, but it’s still far from excellent,” said Tsarovska, who’s been to Israel twice in the last 10 years. “The people who were antisemitic from their childhood are still antisemitic. And I try to have no contact with antisemites.”