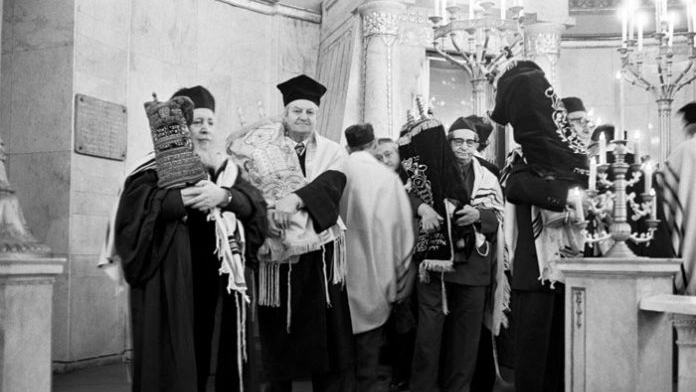 Historical photographs, as well as photographs of Jewish community life in the former Soviet Union, will be on display...

at the Wende Museum in Culver City from November 14 until March 20, 2022. When American photographer Bill Aron traveled to Leningrad, Moscow and Minsk in 1981 to document the Refuseniks – a group of Jews who wanted to leave the former Soviet Union but could not  – it was risky business. At the end of his trip, as he was going back home, the KGB interrogated him and confiscated his photos. Thankfully, Aron had taken decoy photos, which were the only ones that the government got their hands on. He was able to smuggle the important negatives out of the country.

Now, these historical photographs, as well as photographs of Jewish community life in the former Soviet Union, will be on display at the Wende Museum in Culver City from November 14 until March 20, 2022. They will be presented alongside the work of artist Yevgeniy Fiks for a new exhibit called, “Soviet Jewish Life: Bill Aron and Yevgeniy Fiks.” Fiks, a Moscow native, created collages, videos and drawings that depict Birobidzhan, a semi-autonomous Jewish region close to the Soviet border with China. One installation of his juxtaposes a large print of his Soviet passport with audio of Dr. Martin Luther King Jr. coming to the defense of Soviet Jewry in a 1966 speech.

“The Soviet Jewish movement was one of the great causes of modern Jewish history, and one of the greatest successes,” said Ed Robin, visionary of The Robin Center for Russian-Speaking Jewry and a member of the Wende Board of Directors. “It has radically changed Jewish life everywhere, especially in Israel, but also here in the United States, too.”

Along with the exhibits, the Wende Museum is hosting free public programs and educational workshops. Visitors can learn about the Refuseniks, who organized samizdat, the underground publication and distribution of literature that the authorities banned. The samizdat collection material will be made available for scholars, specialists and the public for the first time. On opening day, November 14, the museum will also host interviews with Aron and Fiks and a panel discussion with Robin and former Refuseniks Mikhail Chlenov and Alexander Smukler.

“This exhibition gives us a more personal and nuanced vision of history,” said Chief Curator and Director of Programming for the Wende Joes Segal. “We are living in a period of very superficial stereotypes, and by presenting these more personal perspectives, we can see that history is not as straightforward or simple as people tend to think. The story of Soviet Jewry is quite interesting and pertinent today. It’s a story from the perspective of minorities that really reverberates.”During the Cold War and in its aftermath, about 2 million Jews emigrated from the former Soviet Union; now, the Jewish population in the former Soviet Union is only 248,000, according to the Davis Center for Russian and Eurasian Studies at Harvard University. Most of those Russian-Jewish immigrants settled in Israel, the United States and Germany. A Jewish Journal article from 2014 stated that about 25,000 Russian Jews settled in Los Angeles during the mass immigration.

Robin, who traveled to the former Soviet Union in 1982 to meet with the Refuseniks and bring them messages from the outside world, said that their efforts became an important human rights cause and exposed the oppression that took place.

“That’s what made them the true heroes. They were in a real catch-22. They had ‘Jew’ written on their passport. They weren’t allowed to give up their nationality but they also weren’t allowed to practice Judaism or integrate fully into Soviet society because they were singled out. Many of them were very brave in accepting severe consequences for protesting it and trying to leave.”

Along with highlighting these heroes, Robin said he believes it’s crucial to hold this exhibit so that the history is remembered.

“It’s a time when the Refuseniks are getting older, and it’s important for their stories to be told and their artifacts to be preserved,” he said. “This is a good way to pique people’s interests and commemorate what we think is an important part of history.”

Along with the exhibits, the Wende Museum is hosting free public programs and educational workshops supported by the Genesis Philanthropy Group.